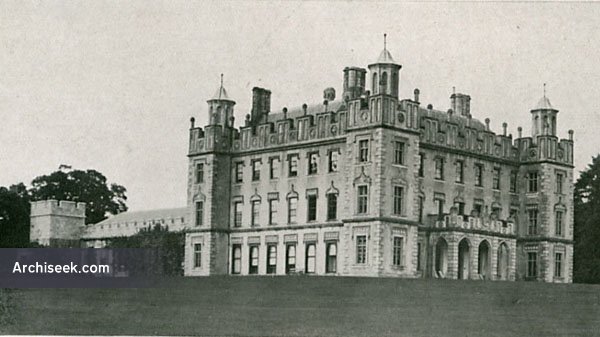 The ancestral home of the Mcmorrough Kavanaghs, High Kings of Leinster, and originally an important castle guarding the River Barrow, Borris House was rebuilt in 1731. It was later altered by the architectural dynastic family, Richard and William Morrison. Externally, they clothed the 18th century house in a thin Tudor Gothic skin, adding a crenellated arcaded porch on the entrance and decorating the windows with rectangular and ogival hood-moulds. Inside the house they created an exuberant series of rooms beginning with the entrance hall, where a circle is created within a square space with the clever use of pairs of scagliola columns and richly modelled plasterwork. The plasterwork was carried out by George Stapleton to designs of Richard Morrison.

From; J.P. Neale, Views of the seats of Noblemen and Gentlemen in England, Wales, Scotland, and Ireland, vol.II, London, 1823
“The situation of Borris is undoubtedly one of the most noble in the Eastern part of the Kingdom of Ireland. The grounds are highly wooded with full grown timber, and rise boldly from the banks of a mountain torrent, which intersects the demesne, and falls into the Barrow, a very considerable navigable river, which forms one boundary to the Grounds. The Mansion stands in the best point for command of prospect, overlooking a rich tract of well wooded country, terminated by a fine range of mountains, and was erected about seventy years ago; but in its original form, the building was without any pretensions to architectural beauty, and in its interior arrangements not sufficiently commodious. It has, however, undergone within the last seven years, a most material improvement, and may certainly be ranked now among the principal of the residences of the Gentry of this kingdom.

The style of Architecture adopted, is that of the period of Henry the Eighth, of which period, though so many beautiful examples are extant in England, yet, in this country, Borris may be considered as unique: this particular style was selected, as being appropriate to the antiquity of the Family of the possessor; and, also, from its very picturesque character, harmonizing so much better with the surrounding scenery than a Mansion of Grecian architecture possibly could.

The interior is so arranged now, as to render it not only complete in its accommodation, but grand in its ornaments and decorations, particularly the Saloon, the principal apartment, the ceiling of which is highly adorned, and supported by groins of a slight curve resting on pillars of Scagliola: in the Spandrils of the arches are Shields supported by eagles. The whole has an appropriate and happy effect, doing much credit to the taste and ability of Messrs. Morrison, sen. and jun., under whose direction, and from whose designs, the improvements in the Mansion were produced.

The Family of Kavanagh, (or rather Mac Murchad, for Kavanagh is but a surname adopted by one of the progenitors of the House), is one of the most ancient and most illustrious in Ireland ; and can trace their descent in a right line from Dermod Mac Murchad, king of Leinster, whose fatal passion for Devorlagh, wife of Ruarc, king of Breffany, in the reign of Henry II. was the immediate cause of the subjection of this kingdom to the English power. Of the same Family was Art. Mac Murchad, the celebrated and successful adversary of King Richard II. in his Irish wars, and the ultimate cause of his deposition: vide Leland’s History of Ireland, Vol. I. Book 2nd, Chap. 5. This Mac Murchad was one of the four kings of Ireland, who, with O’Connor, O’Neale, and O’Brien, were offered the honour of Knighthood by King Richard II., and who expressed their surprise that he should consider the offer of such an honour any accession to their dignity, they having been Knighted according to the laws of their Country, at seven years old. Several interesting anecdotes of this Family are interspersed in the Histories of Ireland.”