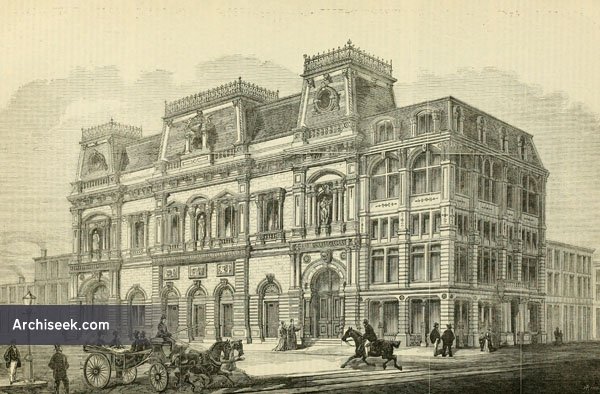 Located on the southeast corner of 23rd Street and Sixth Avenue, Booth’s Theatre was run by celebrated American actor Edwin Booth (brother of John Wilkes Booth, assassin of Abraham Lincoln). Constructed in the Second Empire style with a granite facade with decorative ironwork.
The interior had a grand vestibule with Italian marble floors and a large statue of Edwin Booth’s father, the Shakespearean actor, Junius Brutus Booth. The auditorium was elaborate and technologically advanced. The stage incorporated the most modern machinery in use at the time, hydraulic rams to raise and lower scenery, and stage lights that could be completely extinguished during the performance. The entire theatre was heated and cooled with forced air. Unfortunately Booth could not make the theatre financially viable. It was sold in December 1881, and was converted into the McCreery & Co. department store Operated until 1965 when it was demolished for a parking lot. McCreery and Co. was an upscale quality dry goods store in New York – comparable to Lord & Taylor and Arnold Constable.The site has since been redeveloped.

From The Building News: “ON page 340 will be found an illustration of a new theatre recently completed by Messrs. Renwick and Sands, architects, of New Voik, for Mr. Booth, the celebrated American actor. The theatre is situate at the corner of Sixth-avenue and Twenty-third-street, having a frontage of 70ft. to the former and 2SIft. to the latter. The height from the pavement to the cornice is 70ft., and a Mansard roof gives an additional height of 24ft. The facade in Twenty-third-street consists of three main features, each surmounted by an elevated roof pierced with oval windows and sur mounted by elaborate iron finials. The large doors at either end serve to admit the public and actors. The three central doors are only to be opened in case of fire or panic.”