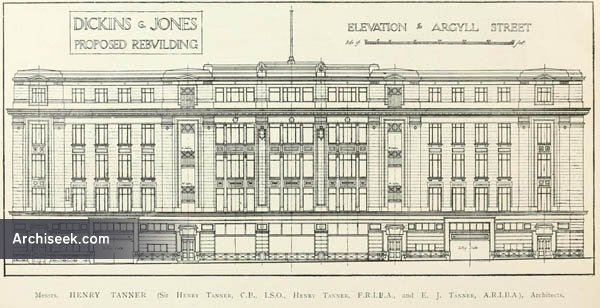 In 1790, Dickins and Smith opened a shop at 54, Oxford Street, at the sign of the Golden Lion. In 1830 the shop was renamed “Dickins, Sons and Stevens”, and in 1835 it moved its premises to the then newly built Regent Street. In the 1890s the business changed its name to “Dickins & Jones”, when Sir John Prichard-Jones became a partner. In 1914 the business was bought by Harrods, as its first acquisition beyond its own original store, ending the stores independence. In 1919, the Dickins & Jones store acquired a new site at 224-244 Regent Street, a short distance away, and in 1922 moved into the new building designed by Sir Henry Tanner. In 1959, Harrods was bought by House of Fraser, but both Harrods and its subsidiary Dickins & Jones continued to trade under their existing names. The store finally closed in 2006, with the building slated for extension and conversion into commercial units.

From several issues of The Building News, November 1920:”We commence to-day a seizes of working drawings of the new buildings which are being erected on an island site bounded by Regent Street, Argyll Place, Argyll Street, and Little Argyll Street. They consist of two basements and five floors above. The elevations are of Portland stone and the structure is steel-framed. The shop-fronts have bronze frames, and windows have steel casements. The cube content is large, and the building has been divided into three portions connected by large openings protected by double rolling shutters, and the staircases are cut off by lobbies with double fire resisting doors. The joinery and fittings will be generally of mahogany. There are to be five passenger lifts and two goods lifts, and these will be repeated in the northern part. Ventilation and warming are provided for by fans both for forcing in the fresh air, warmed when required, and for extracting the vitiated air. There will be a complete sprinkler installation, also vacuum cleaning apparatus, parcel chute, transporter, and revolving table for parcel purposes. The two lower floors will be used for packing and storage, the ground first, and second floors as showrooms, third floor for offices and workrooms, and the upper floor for a restaurant, with kitchen, sewing-rooms and purposes connected therewith. The architects are Messrs. Sir Henry Tanner C.B., I.S.O., Henry Tanner, F.R.I.B.A., and E.J. Tanner A.R.I.B.A., of Regent Street. The builders are , Messrs. Higgs and Hill, Limited.”