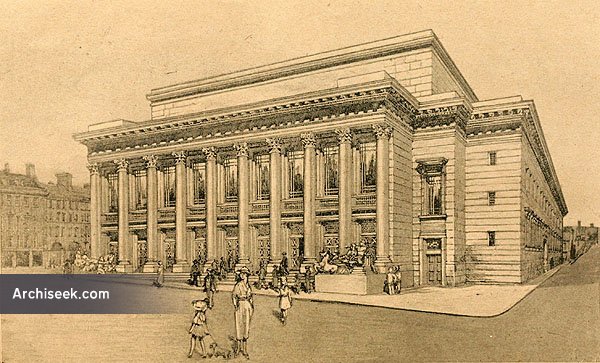 An Architectural competition was held in 1920 to design a new muncipal building including a concert hall venue – and was won by E. Vincent Harris. Construction was delayed 8 years because of the economic climate in the early 1920s. Eventually construction started with the laying of the foundation stone in 1929 and it was opened as Sheffield City Hall on 22 September 1932.

Published in The Building News, August 27 1920: “The awarding of the assessors, Sir Aston Webb, R.A., and the city architect, Mr. F. E. Edwards. F.R.I.B.A., has been adopted by the Council of Sheffield for the New War Memorial Halls to he erected on the fine open site on Barker’s Pool. The author of the design placed first is: Mr. E. Vincent Harris, F.R.I.B.A., of 29, St. James’ Square. Ixindon, and the authors of the designs placed second, third, and fourth respectively are as follows : Mr. Jas. B. Fulton, A.R.I.B.A., of 153. Amesburv Avenue, Streathan Hill, London ; Mr. E. B. Webber, of 8, New Square, Lincoln’s Inn, London; Mr. Howard H. Thomson, F.R.I.B.A., of 8. Market Street, Leicester.

In accordance with the conditions of the competition the authors of the designs placed second, third, and fourth will receive premiums of £250, £150, and £100 respectively. Forty designs were received. Arrangements are being made to place the designs on exhibition in the Mappin Art Gallery for a few weeks to give the general public an opportunity of seeing them. The assessore in their report state that they consider the selected design a very fine one, and well adapted for the purpose it is to fill. The design will provide a building that will be an ornament to the city of Sheffield, and the main hall is expected to be in every way as euccessful as the best concert halls in the country. The building will approximate very nearly in size and requirements to the Usher Hall, Edinburgh. The design shows a building of imposing characteristics, and of austere appearance well suited for a memorial hall, with the best modern thought in architecture expressed in its compact yet comprehensive outlines. Mr. Vincent Harris has contrived his building so as to avoid as far as possible flights of steps outside ; but, owing to the fall of the site, steps were unavoidable along the main frontage where the colonnade to the main entrances occur. The great hall, is oval in form, and the corridors are straight. There is one large foyer instead of being divided into sections, as in some plans. The six cloak rooms are well arranged. The platform and orchestra are placed within the area of the hall, and not recessed. The smaller hall, semi-circular in shape, is situated at the “West Street end of the building, and can be erected in the future if desired — this proviso being stipulated in the competition conditions. The seating accommodation in the large hall is for 3,500. A large crush hall is provided next Barker’s Pool tor the main entrance, the subsidiarv entrances being on the flanking facades in the intended new streets, east and west of the proposed premises. This arrangement and also the two tiers of galleries provided, are common to most of the competition schemes of which there are forty sets. The ceiling takes the form of a deeply coffered flat dome with a top light. This feature is hidden on the exterior by a tall attic treatment. The same architect’s Glamorgran County Buildings, in some respects are recalled by this design.

The design placed second, by Mr James B Fulton. has a circular-shaped big hall and a recessed platform and orchestra. the corridors following the contour of his auditorium. The dome rises externally to view and has a lantern light. A feature is made of the glazed shelters to the side doorways and the vestibule, with the main entrances in Barker’s Pool, forms a subsidiary architectural adjunct to the main block corresponding to the elevation of the minor hall at tho other extremity. A rectangular plan for the hall marks the plan awarded the third place by Mr. E. B. Webber, whoso smaller hall is semi-circular. His crush hall and lavatories correspond more nearly with the elected plan.

The author of the fourth scheme, Mr. Howard H. Thomson, was joint architect with Mr. Stockdale Harrison for the Usher Hall, Edinburgh, ten years ago, when all tho premiated designs in that competition were given by us in our issue of July 29 1910. and following numbers. The Sheffield Memorial Halls competition conditions are almost identical in their main requirements, and were evidently in several respects based upon those of the Ussher Hall. So that it is not surprising that Mr. Thomson should have adopted in & relative way the general lines of this successful work in Scotland, which has an exceedingly able plan. The cost was approximately fixed at £200.000. inclusive of everything except furnishings : but it is doubtful whether this sum under present conditions can actually cover the cost of such a block of buildings. The cost was stipulated as a material element in arriving at the award.