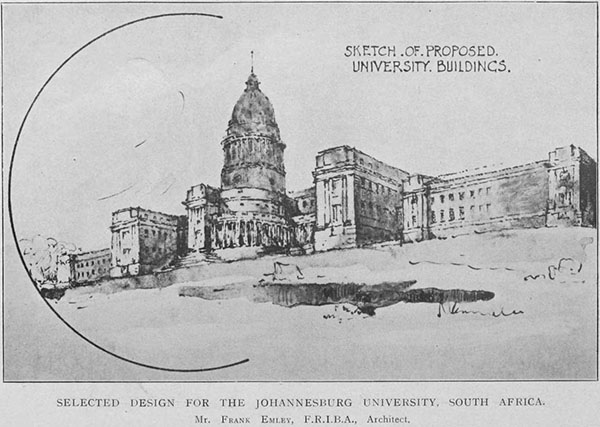 In 1920 Frank Emley entered into partnership with Frederick Williamson having won the competition for the design of the main building of the University of the Witwatersrand with a proposal for a block with a large, high central dome above a large circular hall dominating the plan. Despite protests, the university committee appointed Cowin & Powers, who placed second, as joint architects with Emley & Williamson. The final design for the Main Building at the University of the Witwatersrand was severely neo-classical and among the designs selected for display at the exhibition of Dominion and Colonial Architecture held in London at the RIBA headquarters from October to November 1926. At this exhibition the design was under again Emley’s name despite his ongoing partnership with Williamson. The partners executed a number of other buildings for the University. Published in The Building News, December 10 1920.

“This design, by Mr. Frank Emley, F.R.I.B.A., of Investment and Trust Buildings, Fox Street, Johannesburg, has been chosen for these important buildings about to be built for the City of Johannesburg University. Our illustration is reproduced from the architect’s general watercolour sketch, which is merely intended to show the massing of the grouping of his design and skyline of the composition, rising as at will so eminently on the elevated site, with the great cupola as the central feature as seen from the south or town side of the premises. This perspective study is for the moment the only available drawing for illustration, because for convenience’ sake the competition plans have been divided into parts, owing to their great size, in order to facilitate the preparation of the working drawings ‘ and contract details of the design. These are now being proceeded with. When announcing recently the award of the promoters of this notable competition, H.M. Commissioner in Johannesburg described Mr. Emley as “one of the best architects in South Africa, well known for his high ideals both in art and craftsmanship.” The news of his success was first given in The Building News on September 3 last. In due course we hope to be enabled to publish the geometrical elevations and plans of this monumental undertaking.”