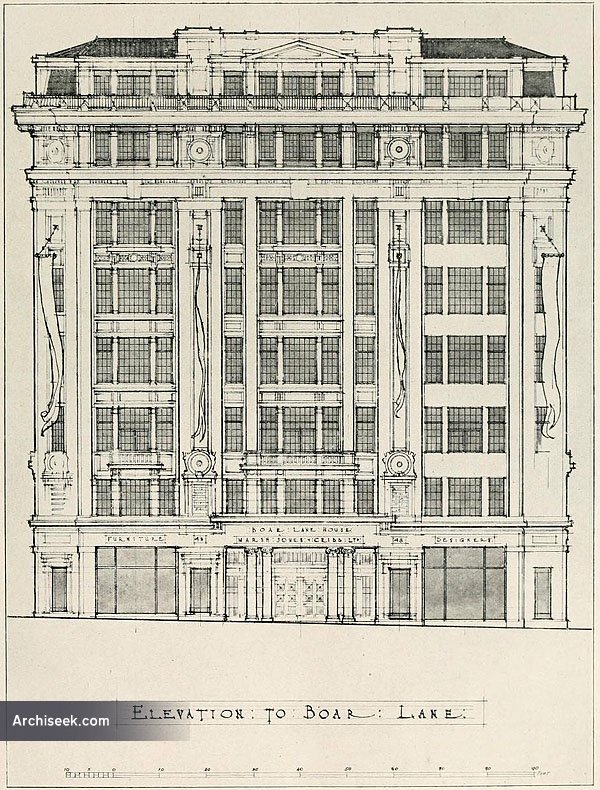 From The Building News, July 16 1920: “Messrs. Marsh, Jones, and Cribb, the well-known decorators and furnishers of Leeds, decided to erect new buildings, and offered substantial premiums for competition designs. Sir John J. Burnet, R.S.A., Ll.D., F.R.LB.A., was appointed assessor. Thirty-one plans were submitted by several leading architects, including a few American firms. The awyard was in favour of Messrs. James T. Cackett and R. Burns Dick. FF.R.I.B.A., of Pilgrim House, Newcastle-on-Tyne. the selected architects. The site has a frontage in Boar Lane, between Basinghall Street and Upper Mill Lane. The section reproduced shows nine storeys, including the basement. Facilities for the receipt and dispatch of goods necessarily constitute a leading factor in the layout of such an establishment. The chosen plans recognise the essential importance of handling merchandise, loading and unloading stock. This proviso settled the particular allotment of space, wlile the character of the adjacent streets determined the exits and entrances. The main portal is in the centre of Boar Lane front, and a similar middle doorway occurs at the other end of the shopping departments and opens into the transversely-disposed arcade. The departments are suitably arranged on either side of the main hall, thereby insuring an impression of orderliness.

The two chief entrances are intended to be the only ones in general use, though there is a subsidiary entrance on both flanks adjoining the staircases, which, however, are primarily for exits. Both the principial north and south entrances open direct into lift vestibules, and the intervening space between is treated as a central cortile, making the “foyer” of this big business house, and forming a capital setting for the display of textiles, furniture, antiques, and decorative exhibits. Its interior is to be finished in Hopton Wood stone, with marble and rubber-tiled flooring. There is to be a deeply coffered ceiling to this apartment, which rises two storeys in height, with a balcony gallery running round at the first-floor level. The site is too restricted in width to allow of the loss of area by carrying wells for light through the several floors. Save on the first floor, the whole aarea is covered except where the big open well is provided over the arcade and goods yard, where the loading dock adjoins the merchandise lift. This square and open light well also lights the north entrance on the ground floor, as well as all the lift halls above stairs.

Light is obtained on all four sides of the central court. This hall is the local feature repeated on every floor ; consequently the balance of the arrangement is obvious at a glance. The net floor area on each storey is about 1,650 square yards. The various departments, being open, are capable of easy adjustment to fit the varying exigencies of the firm’s developing requirements. The lavatories on the first floor are provided for the public and staff, in separate positions. These conveniences can be repeated if desired on the mezzanines, as needed. The staircases are situated at the diagonal ends of the shopping block, and therefore are well distributed. A distinct staircase is also provided for the management, with the advantage of being available in an emergency as an additional exit. The board- room, secretary’s office, and other clerical offices are located on the second floor at the north end. No restaurant, rest rooms, or theatre bureaux are shown, but the plan contemplates provisions of that kind as may be determined later on. A big goods lift alongside of the loading dock forms a ready hoist extending from the sub-basement to the topmost floor. The engineering requisites arc to be in the lower basement. The construction is framed in steel with reinforced concrete. Axed granite is to be used for the facings on the ground floor, with Portland stone above. The window frames and fillings to be of bronzes and cast-iron. Fireproof glazing and bronze screena are intended between the staircases and the departments. The estimated cost is set down in the architects’ report at £300,000, and £15.000 is provided for the tower.”