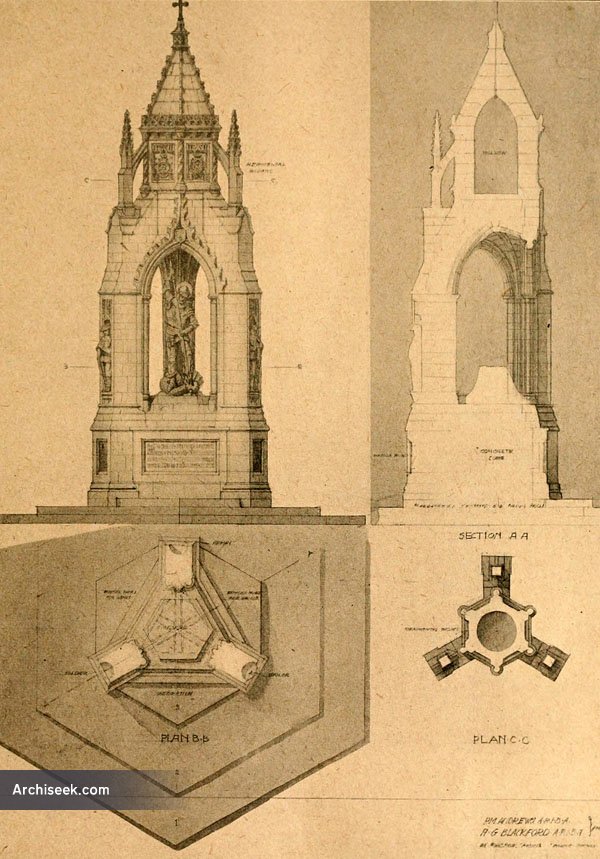 Following the end of the war in 1918, plans were made to commemorate the Bridlington’s fallen with a suitable memorial. A £100 first prize was offered for the best design and over 80 designs were submitted. The judging committee chose that of Mr Ernest G. Theakston, F.R.I.B.A. architect, and Mr S. Nicholas Babb, R.B.S. sculptor.

Published in The Building News, August 13 1920: “The monument is planned on a triangular basis suggested by the site. It consists chiefly of three buttresses enclosing a triangular base supporting a life-size figure of St. George and the Dragon. Above the figure is a vaulted dome within open arches springing from the sides of the buttresses. These arches are projected forward and form a hexagonal upper story, on whose faces are carved the badges of the six Yorkshire Regiments. The tops of the buttresses are finished with small flying buttresses and pinnacles. The whole ends in a spire surmounted by a bronze cross. Figures in bronze of a sailor, soldier, and airman are placed in niches on the outer side of the three buttresses, and bronze panels below contain the names of the fallen. The whole is to be of Ketton stone. Messrs. H. G. Blackford, of Truro, and P. M. Andrews, of Ealing, arc the architects.”