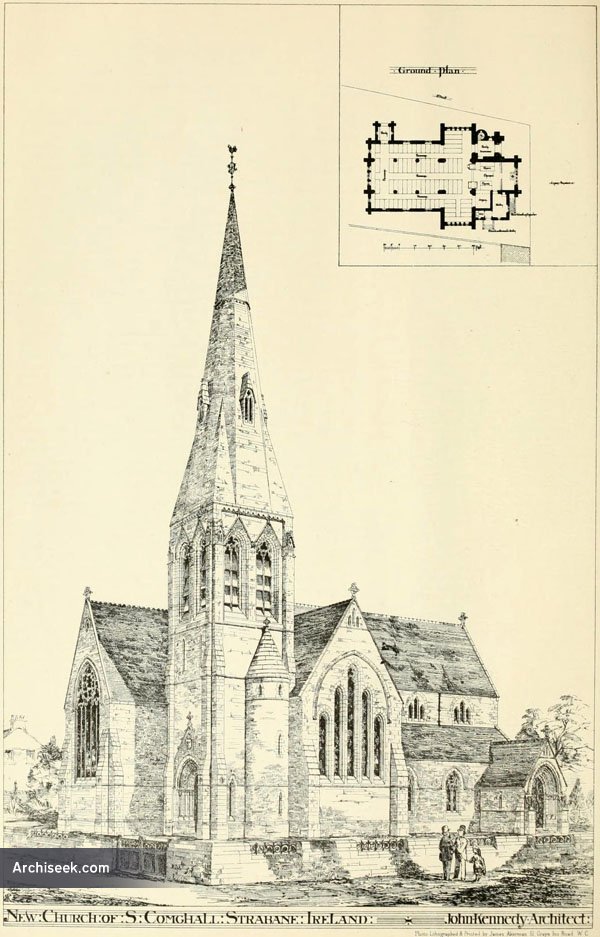 Described as the new St. Comghall’s Church in the architecture press, but named Christ Church. The foundation stone was laid on Tuesday, November 17, 1874, by the Duchess of Abercorn, and the church opened in 1877. Shortly after it was completed, the architect John Kennedy became embroiled in a dispute over a stone carved cross and other external decorative elements with the rector and building committee. This was played out in letters in the local newspaper – The Londonderry Sentinel. The church is still in use today.

A description of the interior from The Londonderry Sentinel, of Tuesday Morning, October 28, 1879: “Accommodation is provided in the church for 420 persons. The pews, which are open, are at a distance of three feet from back to back, and allow a space of twenty inches for each person. There is an open central passage from west to east, and two similar passages for the accommodation of persons in the aisles and transepts. The passages, porches, &c., are laid with Staffordshire tiles, the level of the chancel floor at the east end being about eighteen inches above that of the body of the church. The nave and transepts have pointed barrel roofs, divided into compartments by ribs, and the roof of the chancel is of similar form.

The roofs of the nave, side aisles, and transepts are painted a light blue colour, with stencilled bands dividing the panels. That of the chancel is in a darker blue, with gold stencilling. The arches dividing the nave from the side aisles are supported by beautifully polished shafts of Aberdeen granite, over each arch being a three-light clerestory window, filled with cathedral glass.

Light is amply provided for throughout the building, the window space, in fact, being slightly in excess of what would be required, so as to allow of the introduction at any time, if desired, of stained glass memorial windows. The windows in the west end and transepts of the church are very large five light windows, filled with cathedral glass. The chancel arch, which is of stone, is supported by two polished granite shafts, resting on carved corbels; and the appointments and general effect of this part of the church have been carefully studied. The east window, which is presented by the Humphreys family, in memory of the late Major and Mrs. Humphreys, is a splendid specimen of the art of glass painting, the design being “The Last Supper,” after Leonardo da Vinci. It is in five compartments, surmounted by a large circular opening, in the centre of which is an Agnus Dei, and in the two trefoils on either aide, the Greek letters, Alpha and Omega. On the outside, the window is protected by a sheeting of grained glass and the usual wire netting. Running along the base of the five panels are two inscriptions — the upper one being, “As often as you eat this bread and drink this cup ye do show the Lord’s death till He come;” and the lower line, “To the glory of God, in memory of John and Elizabeth Humphrey — presented by their children, 1879.” The window was made by Messrs. Ballentine & Son, of Edinburgh. It does not darken the chancel, but emits a softened light, while the colours are not glaring.

The floor of the chancel, which is twenty-four feet deep by eighteen feet wide, is laid with Minton’s encaustic tiles, of a beautiful design, and is approached by three white marble steps. The step at the communion rails, and round the foot pace of the table, and the window ledges, are also of white marble. Appropriate texts of Scripture are displayed on the arch, and round the walls of the chancel.

In the south aisle, fronting the entrance, is a lovely little stained-glass window representing “The Good Shepherd” (by A. Gibbs, Bloomsbury-street, London). The tiling, painting, and decorating of the chancel, the marble steps and window ledges, and this window, have all been presented by Mr. and Mrs. McFarlane, of Melmount, two liberal but unostentatious benefactors of the Church. The only other stained-glass window in the church is that in the beautiful baptistry corner at the west entrance, the appropriate design being “The baptism of Christ in the Jordan.” It is also the work of Mr. Alexander Gibbs, of London. The floor of this corner, which is on a little higher level, is laid with Minton’s encaustic tiles, and contains an exquisite little Font of carved Caen stone, on marble pedestals. These have all been presented by Mrs. Maturin, a lady who devoted her collections to this part of the church, and has given her hearty good-will to the work. She has also presented the “office” books and communion linen.

The pulpit, lectern, stalls, and prayer desks have all been presented by the Colquhoun family, in memory of their father and mother, as the following inscription on the base of the pulpit shows: “To the glory of God, in memory of Samuel and Jane Colquhoun, by their children.”

The pulpit is of Caen stone, beautifully carved in floral designs, with openings in the panels. Both pulpit and lectern are exquisite works of art. The latter is in the form of a stone eagle, supporting on extended wings a slab of red marble for book-rest, and raised on shafts of polished red marble. The stalls are also of carved Caen stone. The oak communion table is presented by Mrs. Smith, and the beautiful crimson velvet cover and the chancel kneeling cushions by Miss Smith, the widow and daughter of the Rev. James Smith. Mrs. Boyd presents the oak chancel chairs.

The church is lighted at night by four handsome brass coronas, each containing eighteen gas jets. Two of these are in the nave, and one in each of the transepts. Heating and ventilation have been amply provided for. Hot-water pipes have been laid through the building, the heating apparatus chamber being placed beneath the vestry (with approach from the outside), an arrangement which has the advantage of keeping the organ chamber well aired. Ventilation is arranged by openers in the lead casements of windows. ”

The illustration of the proposed design was published in The Building News, September 25 1874, along with a short description: “The Building Committee of the proposed new Episcopal church, Strabane, advertised that they wished a competition, and ultimately selected the design illustrated. Local rubble will be used, with free-stone dressmgs. The church will seat 400 people, exclusive of choir. The passsages will be laid with red and black tiles, and the chancel with encaustic tiles. The pews will be of pitch-pine, open, and three feet from back to back. The roof inside will be plastered on the back of the curved ribs under the principals, so as to form a pointed barrel, with the ribs exposed and varnished. The Committee hope that the foundation stone will be laid about the third week in October, by Her Grace the Duchess of Abercom. The contract of Mr. McClay, of Strabane, has been accepted at £4,200, including heating by water and lighting; and Mr. John Kennedy, of 18, Shipquay-street, Londonderry, is the architect.”