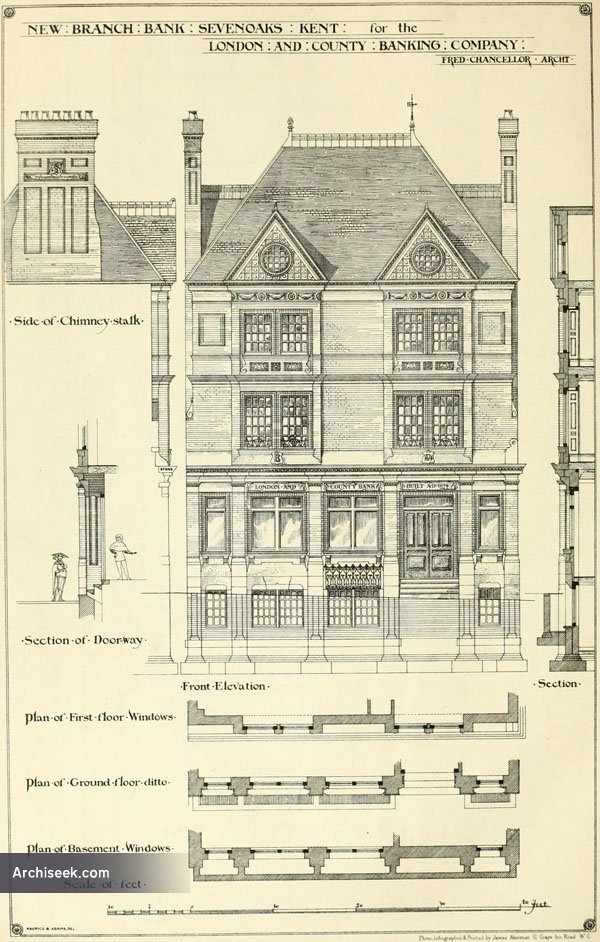 The Surrey, Kent and Sussex Banking Company had been established at Southwark in 1836 and soon had branches in places like Croydon, Brighton, Maidstone and Woolwich. It was renamed the London and County Banking Co. in 1839. By 1875 it had over 150 branches and was the largest British bank. After a series of mergers with the London and Westminster Bank in 1907; and the National Provincial Bank in 1968 to form Natwest, now a part of RBS. Not constructed completely as illustrated (banking hall doorway and adjacent windown were swapped), it’s still in use today as a bank branch.

Published in The Building News, October 23 1874: “This building, which is approaching completion, occupies a prominent position in the town of Sevenoaks. It includes the offices of the London and County Bank, with residence for the manager. The ground-floor is principally occupied by the bank office, manager’s office, and dining-rooms, and the public and private entrances. In the Bank are the strong-rsom, clerk’s lavatories, w.c.’s, &c., and the kitchen and other domestic offices, the upper part of the house being devoted entirely to the manager’s private apartments. The materials used are red brick, the ornamental details being executed in Watcombe terra-cotta. The roof is covered with green Eureka slates. The architect is Mr. F. Chancellor, of 8 Finsbury-circus ; and the builders, Messrs. Purnett and Son, of Tunbridge.”