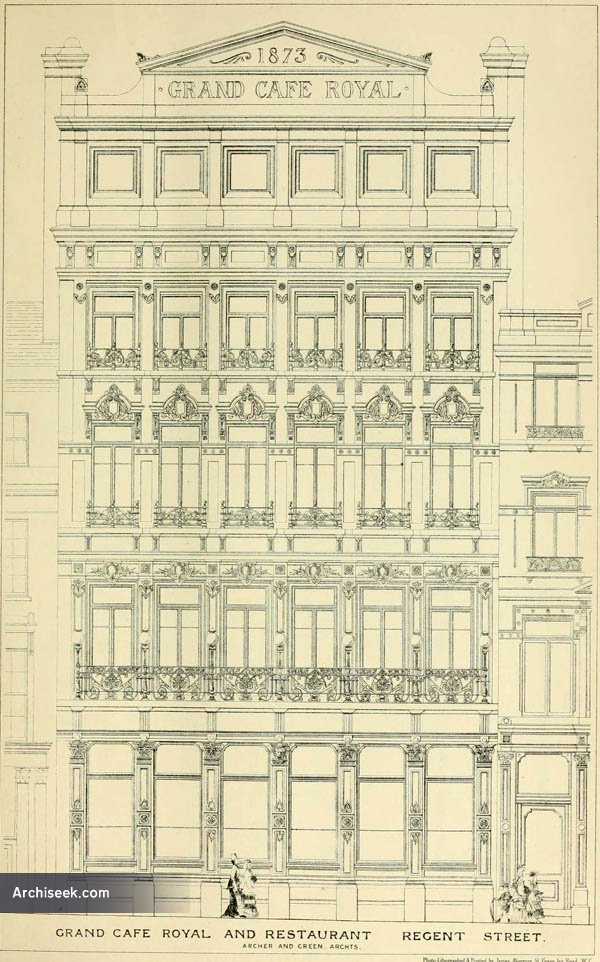 From The Building News, October 30 1873: “This building, the elevation of which we this week illustrate, is situate on tho east side of Air-street, Rogent-street, and has been erected from the designs and under the superintendence of Messrs. Archer and Green, architects, for Mr. Daniel Nicolas de Nicols, tho proprietor of tho Cafe Royal in Regent-street, as an addition to his Grande Cafe and Restaurant. Tho new building occupies an area of about 1,500 superficial feet, the frontage towards Air-street being about 38ft., tho total height of tho building above the ground line being 70ft. The style of architecture adopted, both externally and internally, is an adaptation of French Renaissance. The basement is planned for and fitted up .as a kitchen, larders, &c.

Tho ground floor, which is a lofty room, tho whole area of tho building, is occupied as a billiard-room, having four full-sized tables, and communicating by large glass screens into tho adjoining cafe. The first story is the same size as the billiard-room below, and is used as an addition to the present restaurant, being divided from tho same by ornamental glass screens. Tho second story is divided into a largo dining-room and ante-room, the third story being divided up into four private dining-rooms. The fourth story has be«n specially arranged for the Regent Masonic Hall, and consists of a lodge-room 50ft. by 20ft., with the necessary ante and retiring-rooms, Ac. In the service stories lifts and service accommodation has been carefully arranged, also lavatories and other conveniences. The service accommodation and lifts have been well-considered and arranged to suit the requirements of tho business. Lavatories and other conveniences have been care- fully studied and fitted up throughout. From its position in a narrow street, and tho desirability of obtaining as much light as possible for tho purposes intended, tho windows have of necessity been made as largo and numerous as possible; the front piers in consequence being small, cast-iron stanchions have been carried up the back of them to receive tho principal gilders carrying the floors, together with the whole of tho cast-iron work, including tho ornamental balcony, having balconettes, &c., have been supplied by Mr. J. B. Cooper, of Drury-lane. Tho girders used throughout are Homan’s patent, .and have been supplied by this firm. Tho external stone carving, and tho modelling both externally and internally, as well as the carton-pierre enrichments throughout, have boon executed from the designs of tho architects by Mr. J. G. Kremer, of Augustus-square. The contractors for tho whole of tho works were Messrs. Cooke and Green, of Black- friars.”