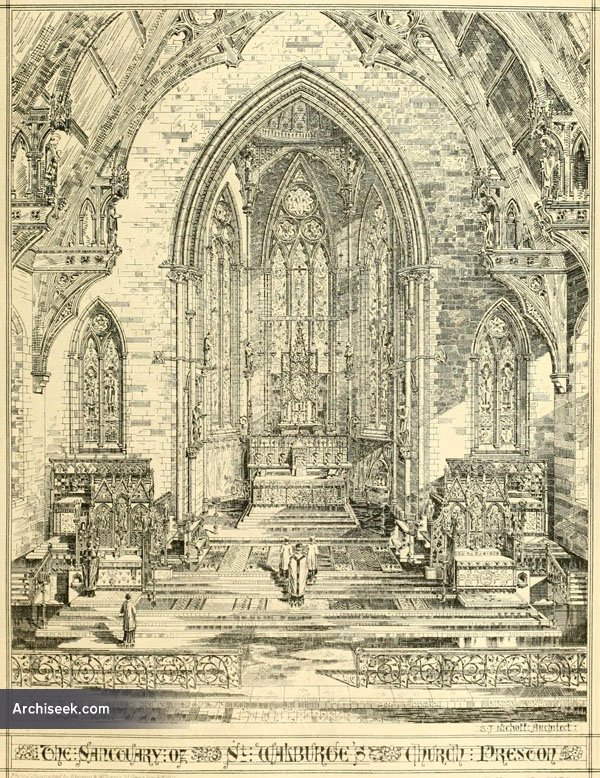 From The Building News, November 1 1872: “THE church of S. Walburge, Preston, Lancashire, was, as originally designed, a parallelogram, with an open timber roof in one span of 55ft., and we give this week an illustration of the sanctuary and apse now in course of construction. The apse itself is 25ft. wide in the clear, the total length of the sanctuary being SOft., affording ample space for the ritual arrangements. The area beneath the raised part of the sanctuary forms a crypt, approached by stair-cases (shown in the view) on either side at the entrances to the side chapels. The three windows originally in the flat end wall are rebuilt in the sides of the apse, and are filled with very rich stained glass ; and in the side walls, concealed from view by the projecting shafts of the arch, there are arrangements of double tracery and deeply recessed windows filled with clear glass to give light to the altar, which stands considerably forward from the end wall, the space behind being occupied by a tribune, on which, approached by a staircase, is placed the throne for solemn exposition. The exterior has bold buttresses, projecting 6ft., and carried up to a height of about 70ft., with pinnacles and deeply-recessed arches to carry the parapet. The ridge of the roof ranges with the ridge of the nave roof, and is surmounted by a bronze gilt cross with the monogram “I H S” some 80ft. above the ground line. The general contractor is Mr. Baines, of Preston ; the sub-contractor for the masons’ work, Mr. Yates ; the carver, Mr. Harding; and the clerk of the works Mr. Fitzpatrick. The design and execution of such an addition to an existing work, the walls being G3ft. high from floor of crypt to the wall plate, and the chancel arch ollft. above nave floor, required the greatest care, and has been successfully performed. The architect is Mr. S.J. Nicholl, of London.”