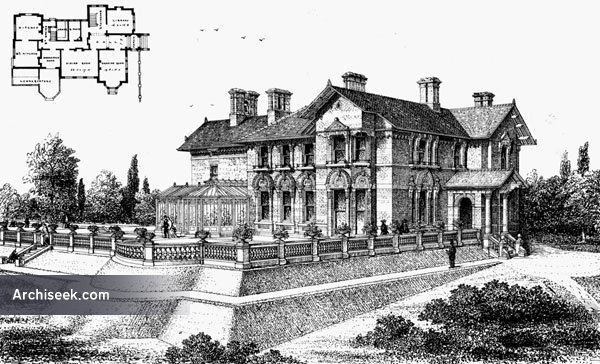 Robert Griffiths was the county surveyor of Staffordshire, England and an architect, noted mostly for asylum architecture, active in the mid- to late-19th century. Amongst his many works were the Hereford County and City Lunatic Asylum, built from 1868 to 1872, and the asylum at Berrywood, Northamptonshire, built in 1876. Illustration published in The Building News, January 5th 1872.

“THIS house, recently erected on a portion of the Rowley Park estate, near Stafford is in the Italian style of architecture, and is built with white bricks, relieved with red ones in plinths, cornices, windows, and other arches, with dressings of Hollington and Darley Dale stone and terra-cotta. The roofs have large projecting eaves, and are covered with Bangor slates. Messrs. Nevett Brothers, of Ironbridge, were the builders; and Mr. Griffiths, of Stafford, the architect. “