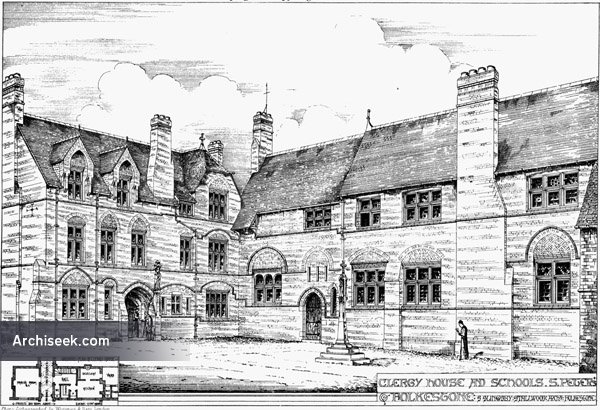 The consecration of the new St. Peter’s as a chapel-of-ease took place of 30 July 1868 by the archbishop of Canterbury. St Peter’s became a separate parish the same year, and became known as the `Mariners’ Church’. Enlargement was soon considered necessary and this was undertaken in 1870 under the local architect S Slingsby Stallwood. Spencer Slingsby Stallwood (1842 or 1843-1922) was articled to an architect in Marlow from 1857 to 1861 and then was in the office of the Salisbury architect, S Clarke until the end of 1862. He entered the office of Joseph Gardner of Folkestone until 1870 and began independent practice in Folkestone in 1873 but later moved to Reading and became diocesan surveyor for Berkshire. Published in The Building News, January 5th 1872.

“AS one of our illustration this week we give a view of a new clergy-house and schools for the parish of S. Peter, Folkestone, to be erected upon land (given by the lord of the manor) immediately adjoining St. Peter’s Church.

The clergy-house has direct communication with the church, and contains upon the two upper floors the bedrooms and private studies for the vicar and assistant priest, and a large priests’ living room, and on the ground floor the hall and kitchen apartments, and a detached room for business or parish purposes. The entrance to the clergy-house leads into a groined corridor, which also will be the public entrance to the church.

The school building will contain school and cl.ass- room accommodation for seventy-five boys, seventy-five girls, and seventy-five infants. The boys’ room is on the lower floor, and the girls’ room above, each -lift. X 17ft., and each cl.ass-room 17ft. X 13ft. The ceiling of the boys’ room and all the roof will be open, of clean wrought Memel timber, not stained or varnished, and plastered between the joists and between the rafters, and all the framing pinned together with projecting pins.

The outer walls are hollow, built of brick and faced with local red kiln brick, and the roofs covered with red tiles. The windows have solid frames, with open casements in small squares below, and lead lights in various patterns above the transoms. AU the internal joiners’ work is stained only. The master’s house contains two sitting-rooms, three bedrooms and other usual accommodation, and stand.s facing the clergy-house on the lower side of the- quadrangle.

Tenders from local contractors for the erection of schools were submitted in October last, and that of Mr. Dunch for £1,023 was accepted, and the works are now in progress ; but the commencement of the clergy-house is likely to be delayed for some short time. The architect is Mr. S. Slingsby Stallwood,, of Folkestone.”