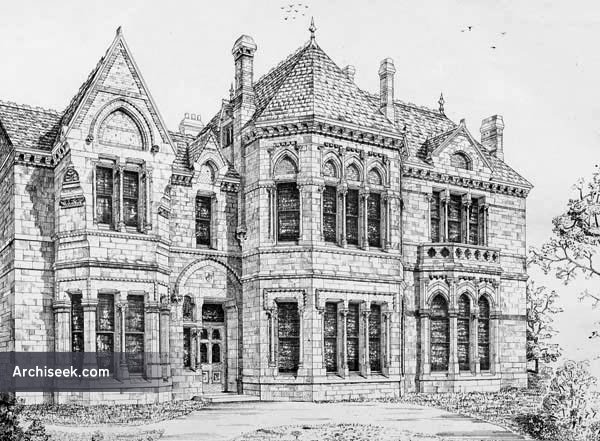 From The Building News, March 3 1871: “OUR illustration this week shows tho residence, as altered, of Alfred Lanyou, Esq., Redruth, which is situated in the centre of the richest mining district of Cornwall. The old house was a very plain erection of 40 years ago, the rooms being small and only S)ft. ilia, in height. The portion to the left of the front door (shown in illustration) contains a private study, itc, and is old, except the bay-window, which is entirely new, and accounts for this portion of the building being lower than the rest. The upper part of the hay is corbelled out and treated in a bold manner, so as to prevent in a measure this portion of the house being dwarfed by the new, which is about 1Oft. higher. The centre bay shows tho breakfast- room ; that to the extreme right tho drawuig-room ; behind which is the dining-room, ’28ft. by 17ft. Altogether there are about twenty-one rooms in the house. The materials used have been graniteo for the sills, lintels, &c., and Alvan stone (similar to but much harder than Portland stone) for the facing, and a dark brown slate stone for the ordinary walling, all obtained within about two miles of the building. Tho carving has been very fairly executed in Bath stone by Mr. Harry Hems, of Exeter. The contractor was Mr. Thomas Jenson, of Devonport. The retention of the old portion of the house rendered the treatment of tho architecture extremely difficult, and caused more variations in the various details than would have been the case had the building been entirely new. The whole of the works were carried out last year under the superintendence of the architect, Mr. James Hicks, of Redruth. “