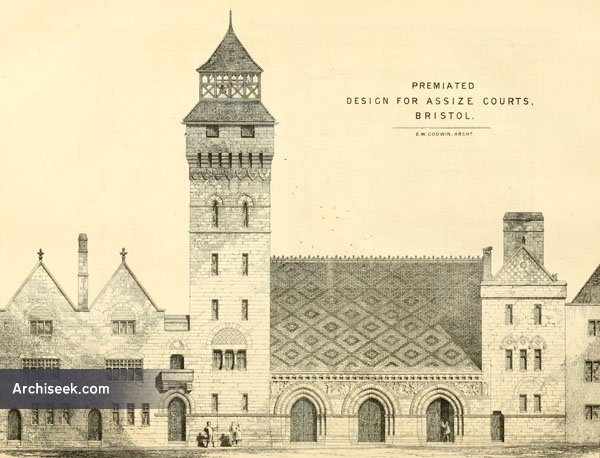 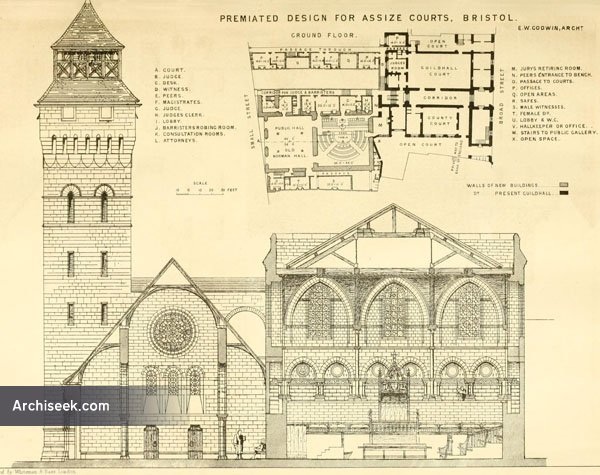 In 1868, an architectural competition was held for a new law courts building for Bristol. After the judging, led by Alfred Waterhouse, it was found that the three pseudonymous entries selected were all by Godwin & Crisp. Waterhouse was requested to reconsider the results and refused. The results were set aside and a new competition was held, won by Popes and Bindon, with Godwin & Crisp placing second.

From The Building News: “WE have more than once been invited to give the designs submitted by Messrs. Godwin & Crisp for the Bristol Assize Courts, and quite a few days since we received a letter from an esteemed Manchester correspondent asking us to do so. We this week comply with the request. Some of our readers will no doubt remember that this competition was a rather extraordinary one. Three prizes were offered, and a limited number of architects — thirteen, if our memory serves us correctly — were invited to submit designs.

In due course the designs were sent in, and Mr. Waterhouse was requested to advise the Committee in the matter of selection. After conscientious and marked consideration, he awarded the first prize of £10.5 for the plan bearing the motto “1066;” the second, of £52 10s, to “Colstonian;” and the third, of £26 as. to ” Nisi prius.” It was found on referring to the authors of the mottoes, that Messrs. Godwin & Crisp had swept off the three prizes ; and one reason why they were so successful was, they strictly complied with the printed conditions. One of the chief features of their designs was the preservation of the historical Colston’s Hall. Some of the unsuccessful competitors raised an objection that their plans had not been considered on their merits, and various reasons were urged in defence of the statement. Mr. Waterhouse was memoriased to reconsider his decision, or to advise a second competition. This he refused to do, and gave unanswerable reasons for his refusal. The Corporation, however, when it received the report of the Finance Committee, refused to be governed by it. The Pall Mall Gazette, in an article written at the time, said : The whole affair is, in fact, a specimen of those corporate and committee ways which are the bane of architectural art, and which have covered the land- with third and fourth-rate specimens of the incapacity of third and fourth-rate men.” After a great deal of squabbling, and in opposition to a protest from the Council of the Royal Institute of Architects, and a memorial from well-known men, a second competition was decided on. In the second competition Messrs. Godwin & Crisp carried off the second prize for a design, of which we will give an engraving in an early number.