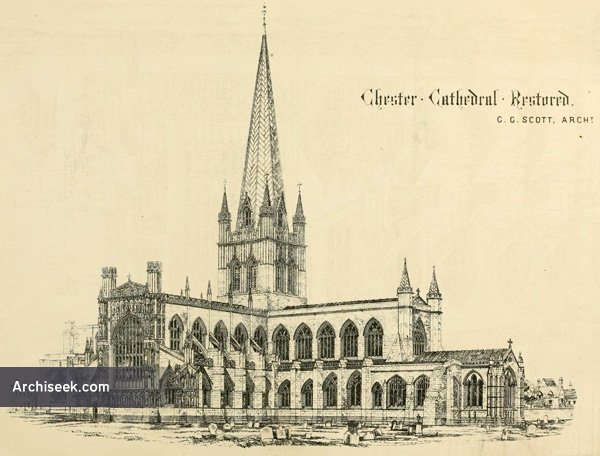 From The Building News: “WE give this week two views of Chester Cathedral as it will appear when restored. Tradition, in this as in so many other cases, ascribes to the Romans the first selection of the site for religious purposes. A temple dedicated to Apollo is said to have been erected thereon by the twentieth legion of the Roman army, during the occupation of Chester. This, however, early in the second century gave place to a monastery dedicated to St. Peter and St. Paal ; but the records of its erection and occupation are vague and traditionary. In the seventh century Wulphere, King of Mercia, of which province Cheshire then formed part, having a daughter disposed towards a religious life, sent her to Ely to take the veil under the care of her aunt St. Ethelreda. St. Werburgh died away from Chester, and was buried in Hanbury, in Staffordshire, but in 875 her bone.s were brought back to the monastery for fear of an incursion of the Danes. About thirty years later, Ethelfleda, Countess of Mercia, removed the monastery to the spot in Chester now occupied by St. Peter’s Church, and erected in its stead a nunnery, dedicated to the Blessed Trinity and St. Oswald, but afterwards changed to St. Werburgh and St. Oswald.

About 10D3, Hugh Lupus, nephew to the Conqueror, and first Earl of Chester, falling sick and conscience-stricken, was impelled to make large grants to the church. He accordingly summarily dismissed a body of secular canons, at that time in possession of the building, and built a magnificent abbey, establishing therein a fraternity of Benedictine monks from Bee, in Normandy, and appointed as their Abbot Richard, chaplain to St. Anselm, afterwards Archbishop of Canterbury. He endowed the Abbey very liberally — in fact, much too liberally for the worldly comfort of his vassals, whom he kindly permitted to leave their bodies for sepulture in the Abbey grounds, and to give the third of their goods thereto. His devotion finally caused him to become a monk himself, and he is said to have died three days after his admission. 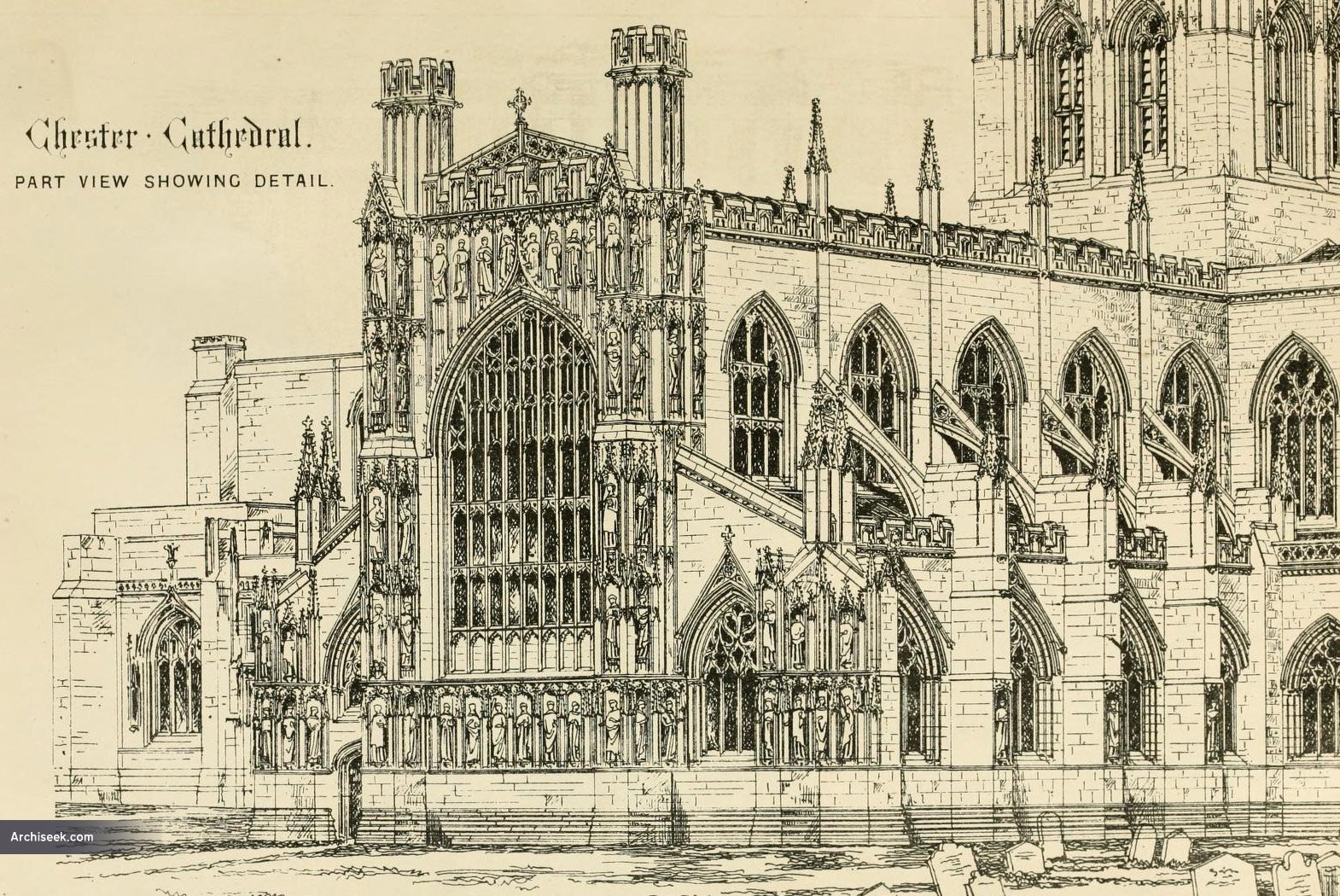 Traces of the Norman Earl’s Abbey exist throughout the building. The vault entered from the west side of the cloister is Early Norman, and is believed to have been the Abbot’s Hall. Many fragments of Norman work have been found during the excavations beneath the buttresses, and Mr. Parker ‘believes that in many parts the walls and buttresses encase the older Norman work. Probably the Abbey was never entirely destroyed, but gradually superseded by the building at present under restoration. The transept was added probably about 1320 ; the nave and tower about 1485, by Abbots Kipley and Oldham, and the western front about 1508. The spire and flying buttresse’s, shown in our illustration, were never added — probably on account of the political disturbances of the time.

The red sandstone of which the cathedral is built is very friable, and decay seems to have followed completion with remarkable rapidity. As usual, however, restoration proved by far a worse enemy than decay. The less said about the work of the first “restorers” the better. Their funds fortunately appear to have been in a poor condition, and the cathedral was thus preserved from further injury at their hands. In 1812, Dean Cholmondeley caused various repairs to be made, especially to the south porch. His successor. Dean Copleston, erected the screen dividing St. Oswald’s Church from the cathedral, which will now be removed, causing that church to resume its proper function as the transept. Dean Anson, to whom great credit is due, threw back the screen which separates the choir from the nave, from the two eastern to he two western piers of the tower.

The present Dean, Dr. Howson, conceived the idea of a thorough restoration of the building. He accordingly, with the concurrence of the Chapter, issued a circular in February last, explaining the condition of affairs. This circular, which was based on estimates prepared by Mr. Christian, as architect to the Ecclesiastical Commissioners, stated that £25,000 was required for ” necessary repairs,” and £27,000 more for “desirable repairs and improvements,” which, with £3,500 for architect’s commission and contingencies, amounted to £55,500.

The Ecclesiastical Commissioners at once contributed £10,000, and we believe over £20,000 more has since been received. The “desirable repairs and improvements ” comprised in Mr. Christian’s estimates include the erection of the flying buttresses shown in our illustration, the restoration of the cloister and the King’s School, the groining of the nave and aisles, complete renovation of the choir, and the restoration of the tower with the spire — the erection of which was doubtless contemplated by the original architects — should the latter meet with public approval.

The task of restoration has been entrusted to Mr. G. G. Scott, whom an enthusiastic local journal — to which we are indebted for some of our information — styles “the architectural genius of the age.” The work will no doubt have his personal superintendence, and in that case our readers do not require to be told that it will be performed faithfully and in accordance with the spirit of the old work.

At the commencement of the work the foundations were found to be in a very unsound state. The Lady Chapel had been rendered additionally insecure by the removal of two interior buttresses, the walls being left to bear the whole thrust of the groined roof These walls have been substantially underpinned — a task very dangerous and difficult. The demolished buttresses have been rebuilt, and the exterior buttresses restored. The north and south exterior walls of the choir are also being underpinned.

The tracery and mouldings on the walls of the tower have almost disappeared, and the walls themselves are thoroughly decayed. These will be restored and the tower re-cased with Runcorn stone. The nave will be restored, the flying buttresses rebuilt, and the niches aud canopies outlined in accordance with their original appearance. An entirely new south end to St. Oswald’s will be executed. The south porch and the west front will be restored — the latter becoming one of the most magnificent features of the cathedral. The roofs of the nave and aisles will be groined — those of the side aisles in stone. The restoration of the nave will probably not be commenced till next year, but the rest of the work is either begun or will be so shortly.

We close our few notes by heartily congratulating all parties concerned in this work. We congratulate the Dean and Chapter on the untiring energy and perseverance they have displayed in so well inaugurating the work in conjunction with Mr. Christian and the Ecclesiastical Commissioners ; we congratulate Mr. Scotton the appearance of another of those opportunities which he so well knows how to use ; and the Church on the prospect now before her of the restoration of another of those “sermons in stone” which in days gone by, when the multitude learnt the lessons of the Faith by means of the symbolism of her architects, she preached to her people.

The illustrations of the cathedral were reduced from the architect’s drawings by the photo-lithographic process by Messrs. Whiteman and Bass.