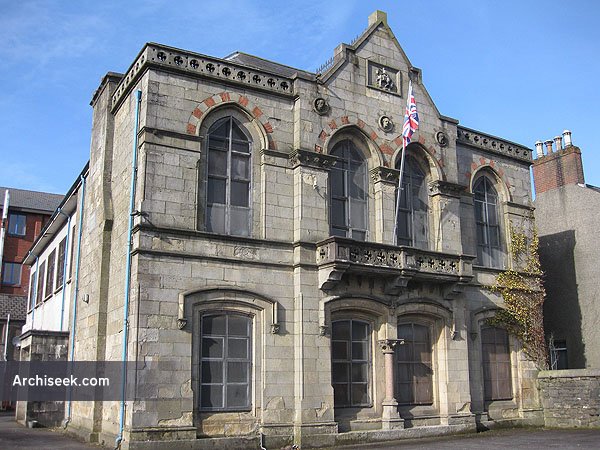 Designed by architect Fitzgibbon Louch, of Derry. Louch had previously been based in Dublin, and later Belfast, before emigrating to Katikati, New Zealand in 1875. His most famous Irish work is probably Lough Eske Castle, Co. Donegal of 1863. The front wall gable contains a plaque of William, Prince of Orange above the balcony area. Just above the window arches are three more circular plaques. In the Omagh Almanac for 1896, it refers to this building as the “Protestant Hall” and it was one of the principal buildings of the town. Extended in the 1960s witrh a rather ugly addition to the rear.

“The first stone of a new Orange Hall was laid on the 19th ult. The designs are by Messrs. Louch and Wilmot, architects, Dublin and Derry. The building will consist of great and minor halls, reading and coffeerooms, caretakers’ rooms, pantry, cloak-rooms, closets, &c. All the apartments will be roomy and well ventilated. The ” great hall ” will be 70 feet by 38, and its height will be 30 feet. It will have a spacious gallery at one end. An open roof, with arched principals springing from carved corbels, will contribute to the architectural beauty of the “great hall,” and make it all the more suitable for the comfort and accommodation of large audiences. The timber of the roof will be stained and varnished. During the day threelight Gothic-headed windows, filled in with memorial stained glass, will receive the light, and gas will be used at night. The reading and coffee-room is to be 28 feet 6 inches by 24 feet, and the ” minor hall,” which will bo finished in a similar manner to the ” great hall,” is to be 42 feet by 24 feet. Chiselled sandstone will be employed in the front of the building facing Bridge-street ; coloured brick will constitute the outer Gothic arches over the windows, and polished granite, with carved capitals, wUl be employed in the shafts of the window columns. The sandstone is to be procured at the Drumquin quarries.

There will be a balcony to the middle windows of the “minor hall”; the parapets will be pierced with trefoils, and the centre gable ornamented with a panel, which will contain a sculptured equestrian figure of King William III., together with busts of the Earl of Enniskillen, Captain Mervyn Stewart, and William Johnston, Esq., M.P. Mr. Samuel McClean, of Omagh, is the contractor.” The Irish Builder,September 1 1869.