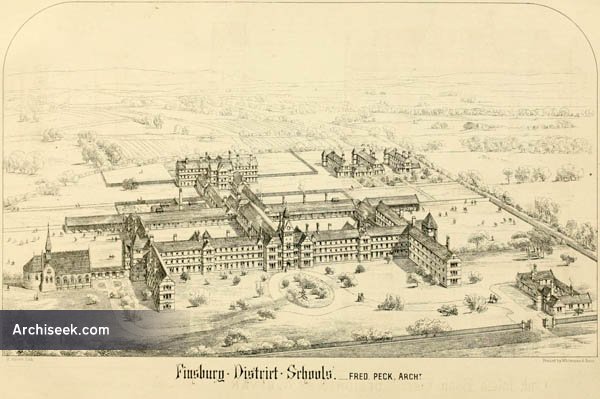 The Finsbury School District, one of several such bodies set up to provide accommodation for pauper children away from the workhouse, briefly existed in 1868-9. It never got as far as setting up a school although plans were approved and a site purchased at Upton.

From The Building News: “WE illustrate in this week’s publication one of the Metropolitan District Schools for pauper children about to be erected for the district of Finsbury at Upton, West Ham, Essex. The buildings provide accommodation for 704 children, with suitable arrangements for officials. There is also an infirmary, fever and probationary wards, entrance lodge, &,c. The estimated cost of the building is £21,120, and it is proposed to proceed with its erection as soon as the present buildings are removed from the site. We should add that this design is the result of a competition. Eighteen sets of designs were received in reply to advertisements. After several meetings this number was reduced to eight, viz. — Messrs. Burgess, Lee, James, Cook, Fowler, Snell, Dunnage, and Peck. Afterwards the above number was reduced to three, namely — Messrs. Lee, James, and Peck. The managers ultimately decided upon Mr. F. Peck’s designs. We believe that Mr. Peck is building similar schools for the districts of Lincolnshire and Nottinghamshire.”