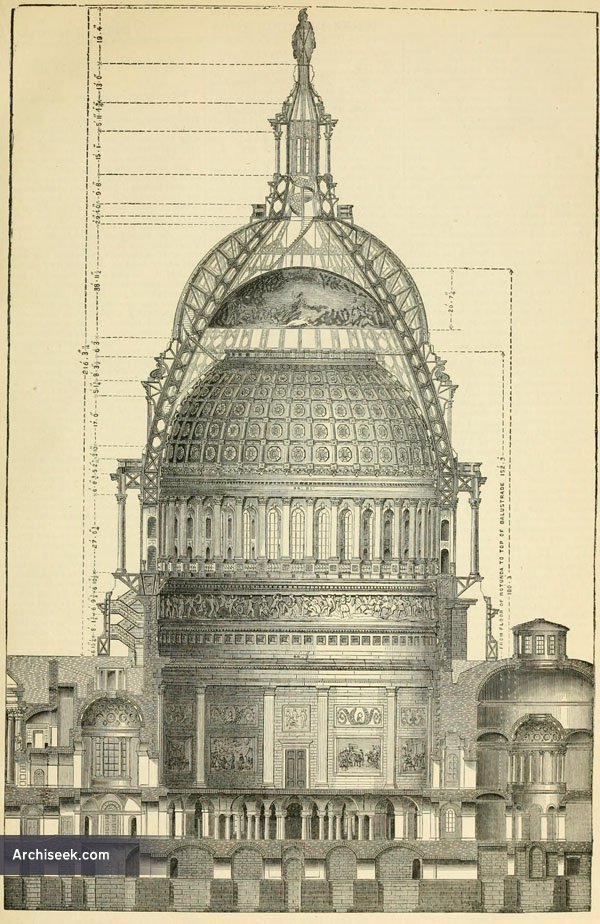 Constructed during the period 1855-1866, the dome was designed by the Philadelphia architect Thomas U. Walter, who was also the architect of the House and Senate extensions. Montgomery C. Meigs, a captain in the Army Corps of Engineers, was the principal superintendent of construction. Finished at the total cost of $1,047,291, the dome was constructed with 8,909,200 pounds of ironwork bolted together. Work frequently slowed to a crawl due to conflicts between Walter and Meig. Walter refused to hand over drawings because Meigs often changed them without consultation. Meigs retaliated by refusing to approve the pay of Walter’s draftsmen. While progress on the dome suffered, the dispute allowed time for Walter to revise the original design of the upper parts of the dome to allow for a larger statue and to fine-tune design details.

The U.S. Capitol’s first dome was finished in 1824 to the design of Charles Bulfinch, a Boston architect who was bringing the building to completion after more than 30 years of sporadic construction. Bulfinch’s low dome was constructed of wood covered by copper.

From The Building News, January 29, 1869: “Though this is unquestionably one of the most imposing buildings in the world, very few persons in this country, we venture to say, have any idea what it is like. No really good description of the American House of Legislature has been furnished by any English writer, a fact which it would not be difficult to account for. Surprisingly few English architects have ever visited the “city of magnificent distances,” which seems secured, then the daily routine work of the strange when we consider the multitude of Englishmen of other professions who annually “do” New York, Boston, Washington, and Philadelphia ; and if we consider, also, how architects invade every corner of Europe, Egypt, and the East. We do not forget that America is not architecturally valuable when compared with the ancient cities of the old hemisphere.

Still America is by no means devoid of interest to the English architect. Much of her domestic architecture is well worthy of attention, and she has hundreds of public edifices of which she certainly need not be ashamed. This same Hall of Congress, as we have said, is one of the finest public buildings in the whole world. In view of the vexed question of what is to be done in order to make the House of Commons comfortable, commodious, and convenient, we invite the attention of Mr. Layard, Mr. E. M. Barry, and all whom it may concern to the American notion of a similar structure ; or, to speak more correctly, a building used for similar purposes. The internal arrangements of the Hall of Congress are in most respects very much superior to those of the Houses of Parliament. This is the testimony of every- body who has had an opportunity of com- paring the two. Washington City was founded in the year 1793. The site was selected by ” the Father of his Country,” who in this instance at least showed that he had profited by his early experience as a surveyor. Washington laid the first stone of the Capitol on the 15th of September of that year, and the city was named after him in conformity with an Act of Congress. Previous to this, and until the year 1811, the National Legislature held its sittings in the Independence Hall, Philadelphia. In consequence of the war, and its train of attendant evils, very little progress was made with the Capitol for nearly twenty years.

In 1814 the British destroyed the portion of the building then finished. It was re-commenced in the following year, and finally completed in the year 1828. Since then, however, it has been considerably enlarged. In accordance with a resolution passed by Congress in 1848, the committee on public buildings invited jilans for the extension of the Capitol, and offered a premium of 500 dollars — no very extravagant sum, certainly — for the plan which might be approved hj the joint committee of both Houses. About iorty designs were sent in, and Mr. C. F. Anderson, of New York, was declared the successful competitor. In the year 1851 the foundation stone was laid, and the entire edifice now occupies an area of about five acres of ground. The Capitol is built of white marble, in the Roman-Corinthian style, modelled after the Pantheon, the proportions of the dome and rotunda being identically the same as in the ancient example. It is composed of a centre and two wings ; each wing is about 140ft. in length and 121ft. in depth. The height of the dome is 120ft. The eastern and principal front, including the flight of steps, which are of very bold proportions, projects 65ft., and is embellished with a magnificent Corinthian portico extending the entire length of the centre. It consists of eighteen columns, each ?A)h. high, and forming a colonnade 160ft. in length, with a pediment of 80ft. span. The centre of the pile is occupied by the rotunda, which is 90ft. in diameter, and 96ft. in height. It is richly ornamented with relievos, and contains several large paintings, including four by Trumbull. The subjects are, “The Landing of the Pilgrim Fathers;” “The Treaty between Penn and the Indians;” “The Preservation of Smith by Pocahontas;” and “The Adventure of Daniel Boone with the Indians.” The hall of the House of Representatives is a rectangle, 140ft. by 93fD., and 36ft. high. A gallery 16ft. wide extends round the four sides of the hall. The wall is divided into eighteen panels, each loft, high and 16ft. wide. These contain fresco paintings illustrative of the most famous passages in American history. The ceiling is flat, and divided into panels bearing elaborate frescoes. The roof is supported by a frame of iron, and the chamber, as in the case of our own House of Commons, is lighted entirely from the ceiling. The Speaker has a rostrum made of Italian marble, with sunk panels, and resting on a base of variegated Tennessee marble, of a reddish hue. It is placed in the centre of the south side of the hall, and consists of two parts, the front of it being a desk sufficiently wide for four clerks. The desks of the members are ranged in front in a semicircle upon a rising platform, somewhat in the style of the Chamber of the Senate in the Palais du Luxembourg, in Paris. The convenience of this arrangement of seats is obvious. This hall is in the east end of the south wing, and occupies but a small portion of it, the remainder being apportioned out into committee rooms and apartments for the Speaker and other officers of Congress. ” The first impression of the hall,” says an American writer, ” is, that its gilding, colour, and ornaments are overdone. Nevertheless the effect is so striking as to almost rise to the magnificent. It must, however, be remembered that everything about it is new, and the glare will be toned down by time. On a second visit this apparent gaudiness of decoration be- comes softened, and as the design and elaborate details are studied the more the mind is reconciled to its tout ensemble.”

The Senate Chamber is situated in the north wing. It is a semicircle, 74ft. long and 42ft. high. A colossal statue of Liberty, and another of History, are the principal ornaments of this apartment, which, however, is more splendidly furnished than the other. The Speaker’s chair is canopied by rich crimson drapery, suspended from the talons of a hovering eagle, and from the roof is pendant a magnificent cut-glass chandelier. Over the President’s chair hangs a portrait of Washing-ton, by Rembrandt Peale, an American artist.

Below the Senate Chamber, and in a hall of nearly the same size, though very much plainer in its appointments, is held the Supreme Court of the United States. The Congress Library, on the west of the rotunda, is 92ft. long, 34ft. wide, and 36ft. high. The splendid collection of books is arranged in arched alcoves ; and round the room run three tiers of galleries, the railings of which are of gilt bronze, and present a very gay appearance. It should be mentioned that there is no wood in the framework of the building. The floors rest on arches of brick, and the “base boards” are marble. Altogether, the Capitol presents a frontage of about 750ft. of marble masonry, and the total cost has been about five millions of dollars. This noble structure stands at the head of an acclivity, commanding a magnificent view of the City and surrounding country, with the River Potomac, and in the midst of grounds and landscape gardens thirty acres in extent. The principal front is turned from the town, towards an open space, tastefully laid out with trees, grass plaits, and public walks. In the middle there is the much-admired statue of Washington in a sitting position, by Greenough. It bears the well-known inscription, ” First in war, first in peace, and first in the hearts of his countrymen.” Near the western entrance is a monument erected by the officers of the Navy in memory of their brother officers who fell in the War of Tripoli — a marble column springing from a large sipiare base to the height of 40ft., and surmounted by the American eagle. At the eastern front again, are groups representing Columbus and Civilization.

The dome of the Capitol, which forms the subject of our illustration oa p. 93, is a fine example of construction in wrought iron. The dimensions are so fully marked that we need not repeat them here. The real dome is formed by thirty-two trusses and arched girders as shown, their outward thrust being taken by the iron tie ring at the base. The architect of the dome was Mr. Thomas U. Walker.”