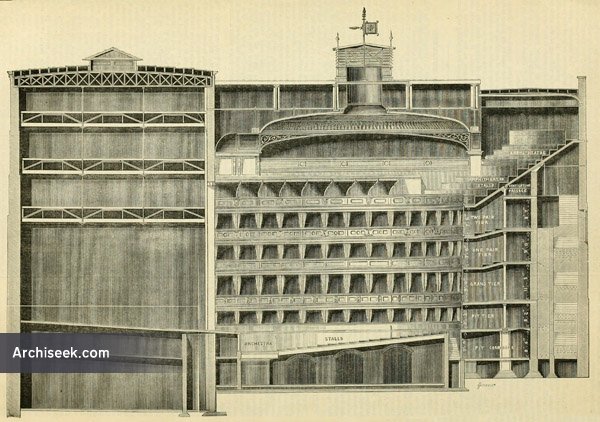 Constructed in 1868 at a cost of £50,000, within the shell of the previous theatre, which had been destroyed by fire, for Lord Dudley. It was designed by Charles Lee and Sons and their partner, William Pain. They had taken over John Nash’s practice on his retirement. The new theatre was designed to be less susceptible to fire, with brick firewalls, iron roof trusses and Dennett’s patent gypsum-cement floors. The auditorium had four tiers, with a stage large enough for the greatest spectaculars. For opera, the theatre seated 1,890, and for plays, with the orchestra pit removed, 2,500. As a result of a dispute over the rent between Dudley and Mapleson,[48] and a decline in the popularity of ballet, the theatre remained dark until 1874, when it was sold to a Revivalist Christian group for £31,000. On the return of the company to the location in 1878, all the fittings of the theatre had been removed, including the seats, carpets and even the wallpaper. £6,000 was spent on fitting out the theatre, and on 28 April 1877 the building returned to theatrical use. Demolished in 1892, for a new theatre by C.J. Phipps.