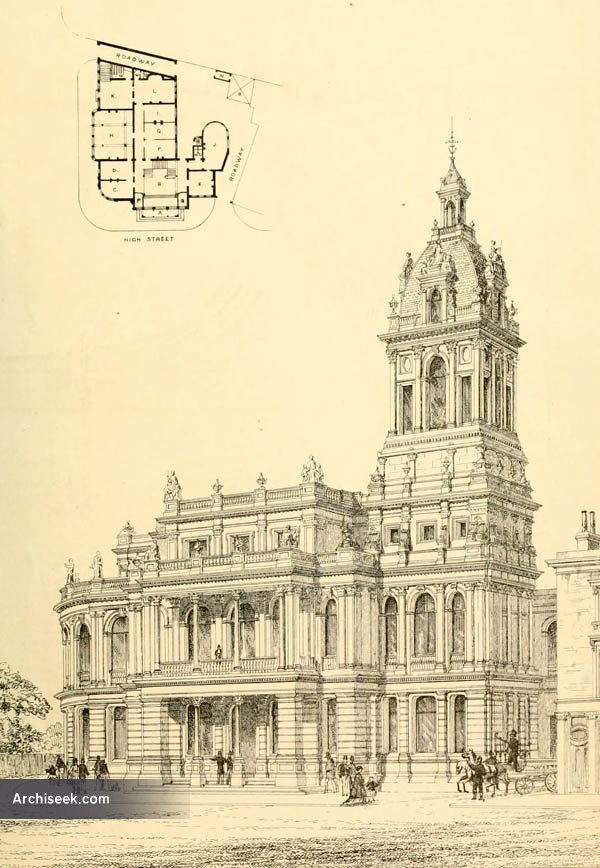 Now known as Stratford Old Town Hall. The Grade II listed West Ham Town Hall was built in 1869. It was designed by Lewis Angell and John Giles in an Italian Gothic style with a domed tower. When it opened the Illustrated London News proclaimed it to be the finest building in Essex. It was enlarged in 1881 to incorporate a courthouse and cells, also by Angell.

From The Building News: “THE subject of one of our illustrations this week is the successful design in the recent competition for the Public Offices and Vestry Hall at Stratford, E., for the West Ham Local Board of Health. The building will be erected on a plot of ground at the corner of the Broadway and West Hara lane. It will be seen, on reference to the plan, that the principal front and main entrance faces the Broadway, and includes I grand entrance hall and stairs to the assembly room ; a corridor connects the grand entrance with the various local board and parochial offices, and the board rooms, all of which are upon the ground floor. A public entrance and waiting hall, with stairs to the assembly room, is also provided at the south end of the corridor in West Ham-lane. The assembly room, retiring rooms, &c., are situated on the first floor. The basement contains strong rooms, stores, and accommodation for hall. keeper; the sleeping rooms are in an upper storey. The tower, which rises to a height, of 100ft., is placed at the north-west angle of the building, and contains the surveyor’s private office, muniment rooms, and other accommodation. The principal front will be faced with Portland stone, the elevation facing West Ham-lane will be in white brick with stone dressings. Over thirty designs were submitted by various architects, that selected being the joint design of Mr. Lewis Angell, of Stratford, and Mr. John Giles (Giles and Biven), of 2S, Cravenstreet, Charing Cross, who are appointed joint architects to carry out the work, which will be commenced forthwith. We are requested to state that the prize designs were coloured by Mr. Betholme, of Great Coram-street. “