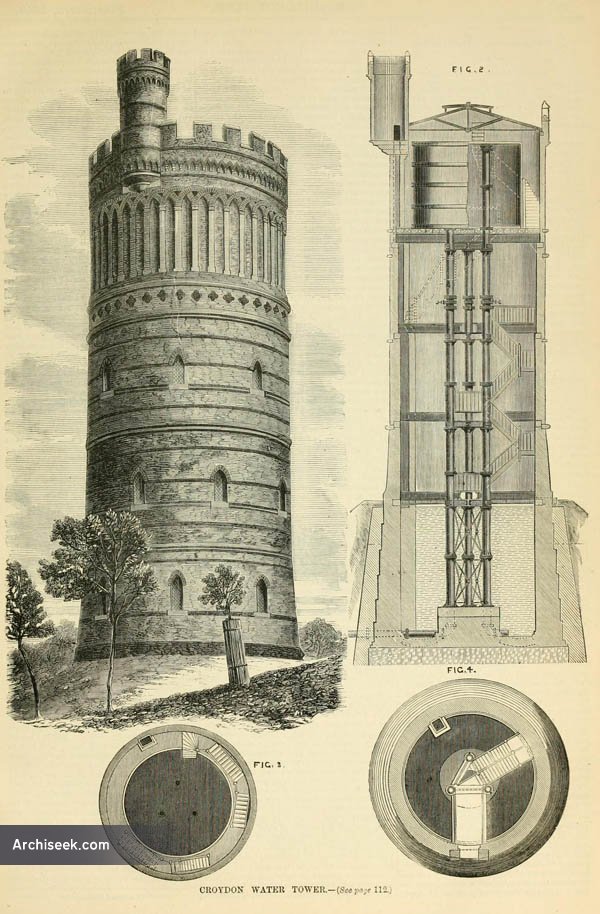 From The Building News: “Croydon water tower, which we illustrate this week, was erected in 1867, from designs by Mr. Baldwin Latham, C.E., engineer to the Croydon local board, by Mr. J. T. Chappell, of Steyning, Sussex, in order to furnish a supply of water to the high-level district of Croydon. The water tower is a Norman brick building, containing a reservoir in the base which will hold 94,000 gallons of water, and which is on the same level as the covered reservoir in connection with the supply to the town ; also a summit tank of wrought iron, capable of containing 40,000 gallons of water. The shell of this tank is made of plates of iron, strength- ened at the joints with T irons, and the bottom of 2in. plates. It is supported partly on the external walls and partly on three central columns, one of which serves to furnish a supply to the high level, a second forms the rising main for the engine-house, and the third acts as an overflow. From the vertical and horizontal sections given in the illustration the construction of the tower will be easily seen. The general design is very good. The height of the tower is 100ft. from the ground level and 125ft. from the concrete foundation. The basement portion forming the lower tank is 27ft. in diameter inside. In the centre is a brick pier, with stone capping, forming the base of the three central columns above mentioned, and round this the bottom of the reservoir is formed by a brick invert, as illustrated.

The engine-house is situated at the foot of the tower, and contains a horizontal engine and two double-acting pumps fixed vertically. The steam is furnished by two of Field’s patent vertical boilers. This engine-house and tower have been built by Mr. Chappell, and the engine was supplied by the North Moor Foundry Company. The engine differs somewhat from the ordinary type of horizontal engine, inasmuch as it is supplied with four equilibrium valves, worked from cams on a revolving shaft. This arrangement effects a great saving, as the excessive friction of the slide valve is dispensed with, and great economy is the result.”