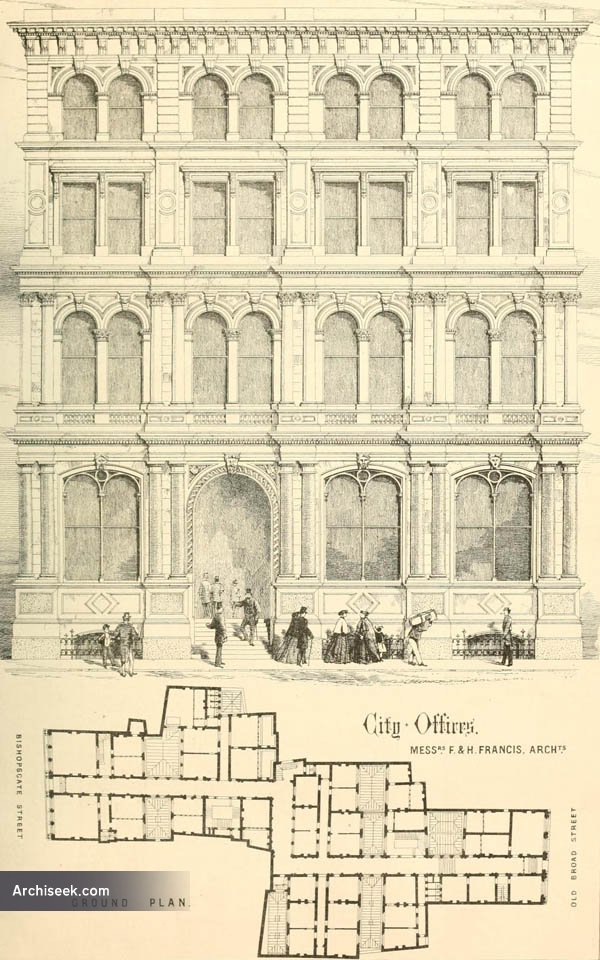 Palmerston House was named after the Third Viscount Palmerston. It stood at 51-55 Broad Street. It was occupied for some time by the Cunard Steam Shipping Company. Demolished to make way for the Natwest Tower, now known as Tower 42.

From The Building News: “The block of buildings just completed for the City Offices Company, called “Palmerston Buildings,” is, we believe, the largest in extent of any recently erected. The greater part of the land was formerly occupied by the celebrated “Bull Inn,” one of those quaint old hostelries, with courtyards and balconies, which flourished in other days, when coaches were the only means for adventurous travellers. The entrance was from Bishopsgate-street, and the stable yard and sheds formed a vast area at the back. Other property adjoining was acquired by the company both in Bishopsgate-street and Old Broad-street, making the total area occupied by the new buildings nearly 30,000 superficial feet. The site, as will be seen from the plan, is irregular in shape, and ex- tends from Bishopsgate-street opposite St. Helen’s Place, right through to Old Broad-street, a distance of about 350ft., the frontage being in Bishopsgate-street 74ft., and in Old Broad-street 62ft. wide. Both fronts are in the Italian style, the former being somewhat more enriched and ornate than the latter.

The Bishopsgate-street facade consists of seven bays, the centre being occupied by the entrance doorway leading to the main corridor, traversing the entire building, and having its exit in Old Broad-street. The ground story is enriched with polished granite shafts and pilasters supporting Doric caps and a full entablature, carrying a similar arrangement of columns and pilasters on the first floor in Corinthian, the upper stories being relieved by rustics and panels. The carving through- out has been treated in a somewhat free style, the capitals being in no case strictly classic in detail.

The Broad street front (a drawing of which is given) has four bays, one being devoted to the en- trance and one to large windows, the spaces between being enriched with three-quarter columns in polished granite, with composite columns on the upper story with rusticated and panelled spaces above. The material used for both fronts is Portland stone. As regards the internal arrangement and plan, the task presented to the architects was to obtain the largest amount of avail- able space for oflices, consistently with a due amount of light and ventilation. This has been accomplished by large and spacious open courts, and by so arranging the courts as to get the largest amount of light from east to west. The building adjoins on the west the large block of offices known as Gresham House, and the architects have continued the courts of the building in question in a line with the courts of that building, so as to improve the light and air of both buildings.

The nature of the levels induced the building of a sub-basement. This is intended to be used for wine and other cellars, and is of great extent, having entrances at both ends of the building. The upper basement will partly be used for cellars, offices, and silk warehouses, as also for strong rooms, refreshment-rooms, &c. The ground floor will contain fifty commodious offices of varying capacity, the remaining space being taken by staircases, corridors, passages, and lighting wells. The main building has, besides, first, second, and third stories, similarly arranged, the attics being confined to the street fronts at either end of the building. The main corridor, which as we have said, runs through the building, is 122ft. wide, except the cross corridor, lighted by a skylight which is 14ft. mde. The cost of the building will be about £80,000. The works have been carried out with great ability and expedition by Messrs. David King and Sons, of Aldgate, the carving being undertaken by Mr. F. G. Anstey, of St. .John’s Wood. The architects are Messrs. F. and H. Francis, of London.