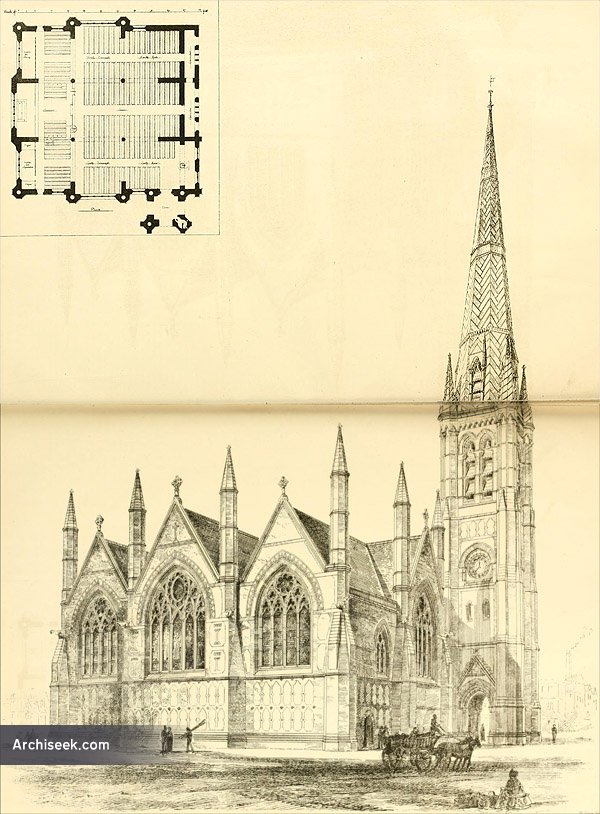 An early design for St. James Church in Great Yarmouth, which would have seen a three-gabled west end in the style of the parish church of St Nicholas on the market place, but it also was never built. Instead a simpler design was constructed in 1878 without its intended spire. Declared redundant in 1999 and converted into offices.

From The Building News, December 20, 1872: “St. James Church will be the new district church, at the extreme south end of the town of Great Yarmouth ; the noble old parish church of S. Nicholas being at the extreme North end. In more than one respect the new church is designed to rival in point of scale its predecessor; thus in width across it is almost its equal, and in height somewhat superior; but in length it falls far short. Vet this deficiency will not at first sight be apparent from the exterior point of view, as the position intended for the tower is such as to make it appear like the eastern portion of a still larger fabric, which may be supposed to extend westward of the projection of the tower.

The site given was difficult to treat, being almost square, the plan consequently adopted is that of a vast Greek cross, formed by the nave, chancel, and transept, each 43ft. clear, internal width. The rectangular form is completed by aisles parallel to the nave and chancel, the tower and spire standing out in projections at the north-west angle. The view seen in our illustration is from the road approaching the church, and, practically, is almost the only one which can be obtained of the building as a whole. In some of the features, such as planting a lofty pinnacle at each angle of the building, the precedent of S. Nicholas Church has been followed. This was not only with the view of preserving and emphasizing, as it were, a local type, but also to afford abutments for the arrangement of wide arches within, which is the peculiar feature of the church. The whole area is covered in with but four internal supporting columns, the arches springing from which are unusually wide, so that there will be scarcely any interruption to sight or sound internally. The chancel alone has been built, as yet, with its arches restrained by iron ties, and filled up temporarily with brickwork. The accommodation will be for about l,200 persons on the ground floor, at the cost of about £10,000. The material of the walling is flintwork, with brick bands and quoins, and stone dressings, with Memel roofs, covered with green slating, and ceiled within with curved boarded ceilings, with moulded intersecting ribs, cornices, and ridge-pieces. The walls within are finished with coloured brickwork without plastering, yellow malms being used up to the springing line of the arches, relieved with a small proportion of red, and above the ground is pale buff, diapered with yellow and red diapers, producing a soft effect ; the arches with their soffits are marked by stronger colouring. The four central columns are of Doulting stone, with carved capitals. The ceiling over the central crux will be treated dome- wise. It is hoped shortly to proceed with the main body of the church. “