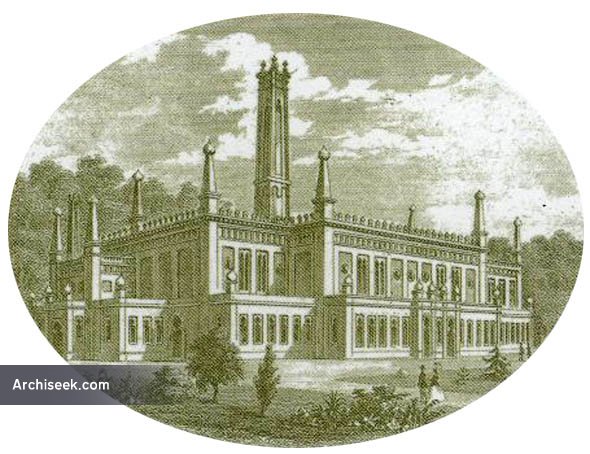 Based on the principals of Dr. Richard Barter who was reponsible for a number of similar establishments in Ireland, and owned by William Dargan. Built in an extravagant Moorish style and they cost Dargan over £10,000. Sir John Benson, architect of the Great Industrial Exhibition and so closely associated with Dargan, designed the exterior. The building was 180ft long by 70ft wide with a base of cut granite, and walls finished in red and white bricks, laid in an ornate chequered pattern. The interior was designed by the doctor’s nephew, Richard Barter, who designed similar establishments elsewhere in Ireland.

Described by Robert Wollaston: “The building cost £10,000; it is extremely handsome, of an Oriental style of architecture–of red and white bricks alternately placed, and faced with stone. The interior is very appropriately decorated, and composed of several apartments admirably adapted to their respective uses. There is a grand entrance hall, or reception room, divided into a dozen small apartments on each side of the hall, each fitted as a dressing room, with a couch, &c, to lie down upon after the use of the Bath; divans or couches placed around the room for the purposes of reposing, smoking, and conversation. The ceiling is painted in arabesque, and richly colored with the favorite Turkish colours–green, red, and blue. The windows are all of colored glass, and the light of the apartment is most agreeably diffused by the hues of the glass. The centre is ornamented with a handsome marble fountain; flowers and aquatic plants, and ferns, interspersed amongst shells and rock-work, adorn the fountain.

The flooring is richly inlaid with tesselated pavement–made for the purpose at Minton’s Porcelain Works, in Staffordshire–in imitation of the pavement of ancient Baths. The warm and hot air rooms are also beautifully constructed, with marble seats and tesselated pavement; the domes are enriched with stars of variegated glass, which give a brilliant appearance. There are, in recesses connected with the hot rooms, chambers for ablution, where tepid and cold water are plentifully supplied as Shower and Dash Baths; and there are to be attendants in Turkish costume to shampoo the bathers; coffee and sherbet, cigars and pipes, will be added, to complete the whole ceremony of the Turkish mode of bathing.”

Closed by 1867, the building survived until 1980 when it was demolished. In the intervening years, it was used as assembly rooms, a cinema and eventually stood derelict for some years.