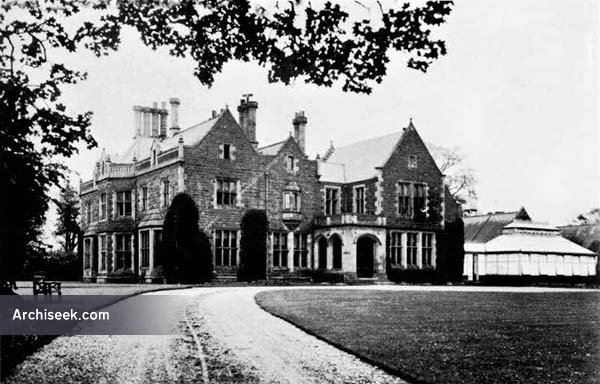 The original house was designed by Blore in a Tudor Revival style. In October 1836 he visited the estate “to examine the House and advise with Mr. Montgomery [the new owner] as to the expediency of building on the site of the old House or to change the site”. In January 1837, he submitted a complete set of plans, elevations, sections and working details, for a fee of £180. A drawing of the elevations is in the Victoria and Albert Museum, London.

Extended in 1876 to designs by W.H. Lynn, although they have been credited to Sir Thomas Drew. A plan of the elevation of the entrance front, signed by Lynn and related to a contract for the work, signed 1 August 1876, is in the Public Record Office Northern Ireland. The entrance front was considerably improved by W. H. Lynn’s alterations.

The house lay empty for several years, until the estate was purchased by Malone Golf Club in 1960. The house remains fairly extant though minus its fine Tudor chimneys, mullioned and transomed windows, and balustrades.