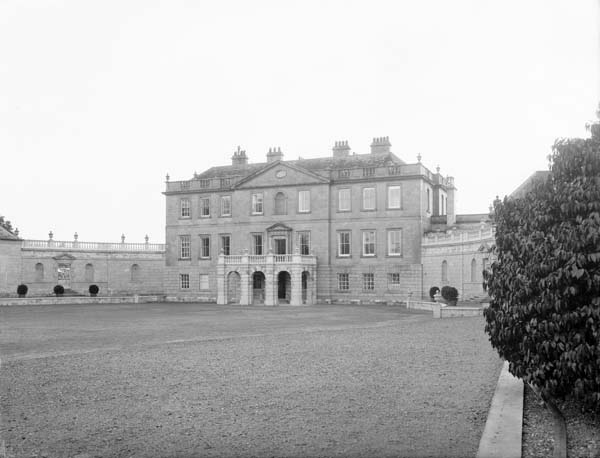 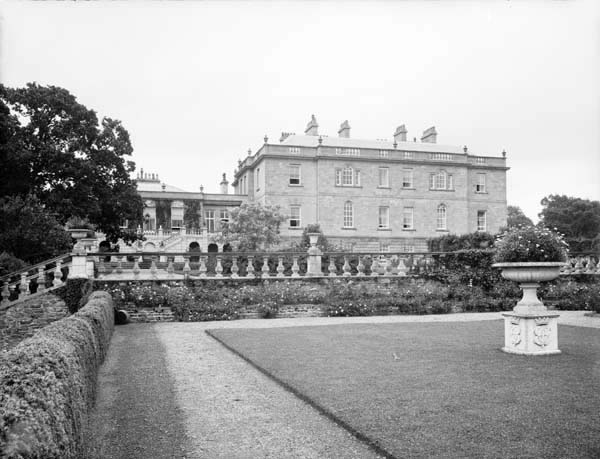 Large Palladian house with wings, designed by Francis Bindon around 1744 on the site of an earlier house. Later addition of a porch by Sir Thomas Manly Deane, who also moved the principal entrance to the ground floor, and converted the original hall into a sitting room. The cigarette card illustration shows the entrance front prior to this. In 1923 the house was burnt and severely damaged. A thorough and complete reconstruction followed and was completed by 1929. Now known as Kildalton College, an agricultural college run by Teagesc.

From; J.P. Neale, Views of the seats of Noblemen and Gentlemen in England, Wales, Scotland, and Ireland, vol.II, London, 1823:
“Bessborough is situated toward the eastern end of a fine country, called by way of eminence the Golden Vale, distant about seventy miles south from Dublin. The ancient name of the Mansion was Kildalton, and the Owner having forfeited it by being engaged in the Rebellion of 1641, it was granted to Sir John Ponsonby, an officer in the Parliament army, the immediate ancestor of the present noble Proprietor.

Brabazon, first Earl of Bessborough, in 1744, pulled down the large ancient building which formerly stood here, and erected the present Mansion on the site of it. It is constructed of hewn stone, extending in front above 100 feet, and in depth 80 feet, from a design of Francis Bindon, a native of Ireland, who had visited Italy, and who professed the arts of painting and architecture; his name stands among the earliest of the Irish artists: he lived in intimacy with Swift, Delany, and Sheridan, and died much respected in 1765. The Hall is large, handsome, and in some respects unique, for it is adorned by four Ionic columns of Kilkenny marble, each of the shafts consisting of one entire mass, 10 feet 6 inches high. The Saloon and Dining Room are furnished with several fine Pictures, deserving the attention of the connoisseur; particularly a Night Piece; Peter’s Denial, by Gerard Segers, formerly belonging to Monsieur De Piles; a Nativity, by J. Jordaens; three fine old copies after Corregio; Birds, by Hondekoeter; Dead Game and Fruit, by F. Snyders and De Bos; with several Landscapes by Lucatelli and Horizonti. In the Corridor, leading to the principal staircase, are placed two horns of the moose deer, remaining fast to the skull: they were found at the farm of Belline, in November, 1781, and are supposed to be the largest ever discovered; the length of each horn, from the extremity to the tip, is 6 feet 1 inch.

The Edifice itself is situate in a fine well wooded plain, bounded on the north by the great chain of the Walsh Mountains, on the summit of the principal of which is a remarkable Pagan altar, dedicated to the sun, and said to have been the Table of Fin Macornall the Fingal of Ossian. (Vide Milton’s Irish Views).

The south side of the plain is bounded by the Suir, a navigable River, which in its progress through the Golden Vale, runs long the foot of a high range of hills, and divides the counties of Kilkenny and Waterford. The surrounding Park is very beautiful; it is watered by a rivulet called the Shara.