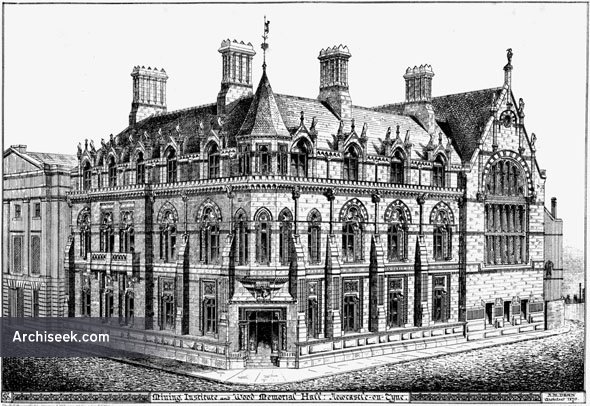 Now known as Neville Hall, a Grade II* listed building and home of the North of England Mining Institute. It was designed and built at the height of the Gothic Revival by architect A. M. Dunn. It is an adventurous manifestation of the mingling of secular design with traditional ecclesiastical architecture, and probably a project close to Dunn’s heart. From the locality and a son of the Government Inspector of Mines, he was also a local alderman and justice of the peace. He was in partnershop with Edward J. Hansom at this stage, but was accredited solely for this design.

THIS building, of which the Wood Memorial Hall forms part, was erected principally for the accommodation of the members of the coal trade. as well as of the mining and mechanical engineers of the north of England. It was designed b}’ Mr. Archibald M. Dunn, of the firm of Dunn & Hansom, Newcastle. The edifice is constructed from what maybe termed a French-Gothic model, the two fronts being executed in Prudham stone, with bands of red sandstone at intervals, and insertions of Shap Fell granite, and the interior arrangements are — on the ground floor a board-room of 23ft. Gin. by 21ft. 6in. for the directors of the Blyth and Tyne Rail- way Company, as well as commodious offices for the secretary and other offcials. The members of the Mining Institute have a full set of offices on the first floor, as well as two large council chambers, one 28ft. Gin. by 20ft., and the other 23ft. square; and, in addition to this, the necessary accommodation for the members of the coal trade provided on the same flat as well. The top story is apportioned for general offices — some of which are already occupied by the professors of the Science College. The cost of the whole undertaking is nearly £20,000.

The contractors for the work were Messrs. Howard & Son, of Newcastle. The Wood Memorial Hall forms a conspicuous part of the building, and is distinguished externally by the gable which rises above the roof of the main block, and the large window which is so prominently inserted into it; while a striking feature is furnished by the apex of the gable being appropriately surmounted by the figure of a pitman, who, with pick on shoulder and Davy lamp in hand, is supposed to be trudging away to his hazardous occupation below ground. Admission to the hall is obtained through the principal entrance of the Mining Institute — immediately opposite to the Stephenson Monument — but, in addition to this, easy access can also be gained from the rooms of the Literary and Philosophical Society adjoining. The hall, which is entered from the first landing on the staircase, is about 10ft. in length by 20ft. in width, with a wall height of 27ft., and a clear height of 39ft. Gin. to the ceiling. The walls are lined with polished Caen stone, relieved by the introduction of bands of red sandstone over the side arcades. It has a panelled ceiling of stained wood, supported by half-a-dozen semi-circular moulded ribs, with an enrichment in the soffit. These ribs rise from coupled serpentine marble shafts, with carved caps and moulded bases, and display at the foot of each column a shield, on which is inscribed the arms and monogram of Mr. Wood. The carving reflects credit on Mr. Roddis, of Birmingham. The apartment is lighted at each end with very large live- mullioned tracery windows, having circular heads, and being filled with delicately-tinted glass by Mr. Cooke, of London. These windows, which are of six lights, are divided into three tiers each ; and in addition to appropriately bearing the arms and monogram of the Wood family, an accompanying inscription sets forth that “This hall was erected 1870, by public subscription, as a memorial of Nicholas Wood, the first president of the North of England Institute of Mining and Mechanical Engineers ; died l1th December, 1865, aged 70 years.” A panelled wainscot dado, 7ft. in height, protects the lower part of the walls around the room ; while the recesses formed by the arcading on each side have been tilled up with shelves in such a way as to give accommodation to a large number of hooks. Immediately opposite the entrance to the room, and occupying the centre of the arcades, is placed a life-sized statue of Mr. Wood. The remaining arcades, nine in number, are intended to be occupied by full-size portraits of the leading engineers of the district; and models of machinery, and other apparatus relating to mining operations, are intended to be appropriately placed on stands beneath them.

When this part of the scheme is accomplished, and the panels of the roof receive their golden decorations, the interior will not be excelled by that of any building in the north. The Memorial Hall, which is superbly fitted with Gothic furniture, is connected with the Literary and Philosophical Society by means of a fireproof passage, and thence with the Museum and Natural History Society; while. with the College — the members of which have rented some of the basement premises of the new building for a lecture room and laboratory — there is also a direct communication at the rear. It will thus be seen that the advantages of the different places can easily be made accessible, and hence they must not only prove of great value to the members themselves, but also to the students of the Physical Science College, who undergo their training in the same place.