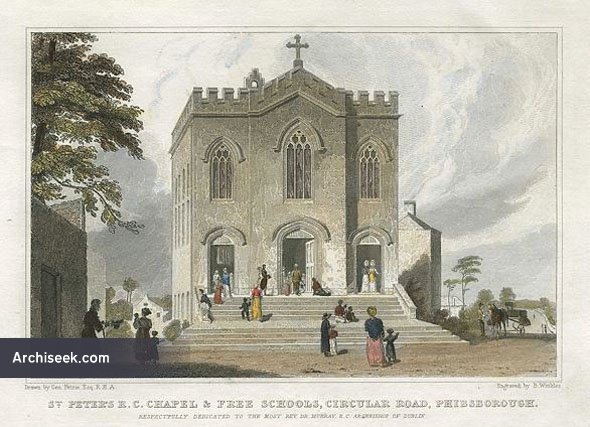 An early description of the church and school which opened in 1826: ‘St. Peter’s chapel stands at the divergence of the New Cabra Avenue, and the beautiful and fashionable ride to Phoenix Park, called ‘the North Circular Road’. The chapel consists of a Porch and Chancel eighty feet in length, by forty in breath, very neatly and unostentatiously finished. The exterior is in Milner’s second order of Gothic Architecture, very correctly executed, and built of the impure lime-stone found in the County of Dublin. The floor of the Chapel is much elevated above the exterior surface, which gives an opportunity of introducing a beautiful flight of steps, with broad landings in front, and admits of a spacious apartment beneath, used as a free-school, where the poor children of the district are educated’. Later replaced with the fine St. Peter’s Church that is on the site today.

Described in 1837, “There is a chapel of ease at Phibsborough, a neat Gothic structure, but too small for the increasing congregation: beneath are male and female free school-rooms, and apartments for an orphan society, and over the sacristy a residence for the clergyman and a lending library belonging to a branch society of St. John the Evangelist. “