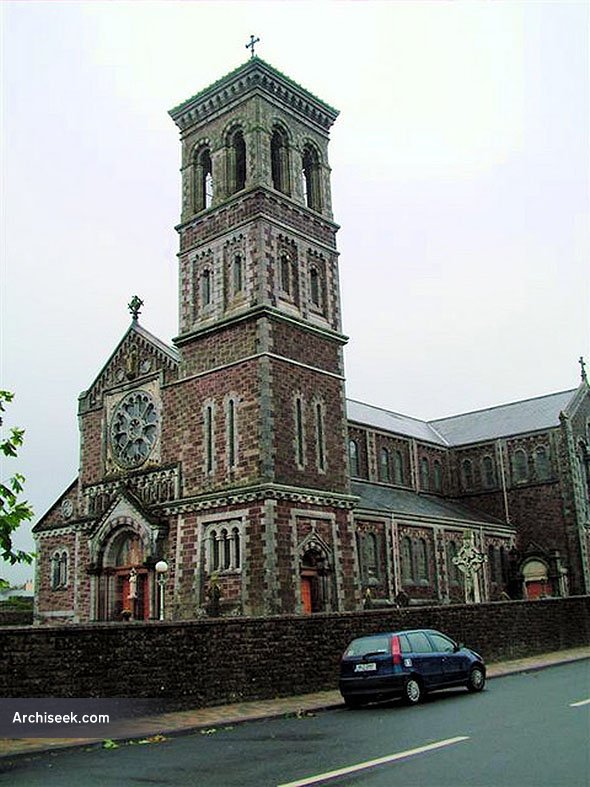 St Cartage’s Parish Church was officially opened in 1884, and is regarded as one of the finest examples of Lombardo-Romanesque churches in Ireland. Red sandstone, quarried locally, and white limestone were used in the church’s construction. The bell tower rises to a height of 120ft. above the richly detailed facade. The church contains some interesting stained glass of the Celtic Revival, notably a set of three windows commemorating saints associated with Lismore – Cathaldus, Carthage,and Colman.

“Plans of a beautiful new church were pro cured from Mr. Walter G. Doolin, the eminent architect, of Dublin, and a month ago a contract was given to the Messrs. Redmond, a very energetic firm of builders in Wexford, to carry out Mr. Doolin’s design, and they have already so far proceeded with the work that the tower and the greater part of the old church have now disappeared. The bequest left by Mr. Morrissey was the nucleus of a fund which has since been increased by large subscriptions from the parishioners. The new church is in the Romanesque style of northern Italy, with its usual characteristics of broad frontage, rose window, campanile tower, and semicircular apse. The church will consist of nave, aisles, transepts, and semicircular apse with side chapels. The extreme length of it internally will be 140ft., the width between the aisles will be 55 ft., and across the transepts 95 ft. The design for the west front is of a rather elaborate character. Here will be the principal entrance, and it will project boldly from the front, and will be surmounted by a deeply recessed arch borne on marble columns. In this frontage there will be also the rose window, surrounded by figures of St. Carthagh and the four Evangelists, and the campanile tower, which will be of a very Italian character. The tower will be 120 ft. high. The arches between the nave and aisles will be supported on monolithic columns of polished Aberdeen red granite, having elaborately carved capitals of Portland stone. The roof generally will be open-timbered, with pitch pine panels, but over the chancel it will be vaulted in pitch pine. Mr. John Redmond, builder, Wexford, has undertaken to complete the shell of the church for a trifle under £9,000; but, of course, this does not include any ornament or embellishment; and when fully completed it is expected that the costof the building will be close on £11,000.”