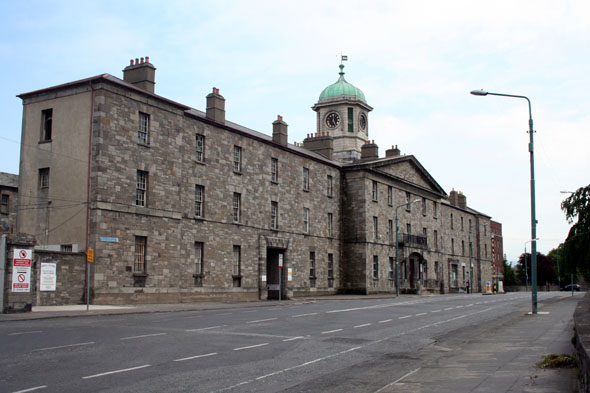 Designed as an alternative to transportation, the Richmond General Penitentiary was part of an experiment into a penitentiary system which also involved Millbank Penitentiary, London. They were the first prisons in the United Kingdom of Great Britain and Ireland to specialise in reform rather than punishment. In 1897 ownership of the building was transferred to the Richmond District Lunatic Asylum and it was thereafter referred to as the “annexe” and used to house patients and for administrative functions. The forbidding frontage which consisted of one central block featuring a clock-tower with two wings either side originally extended 700 feet along Grangegorman Lane. Richmond District Lunatic Asylum eventually became St. Brendan’s Hospital and the former gaol building awaits a new use as part of the Grangegorman campus for the Dublin Institute of Technology.

Described in ‘The New Picture of Dublin: Or, Stranger’s Guide Through the Irish Metropolis’, published in 1831, as: “A very fine building of its kind, is situated to the north west suburbs of the City. It presents a front of 700 feet to Grange gorman lane; is in depth about 400 feet and covers an area of three acres. It is a plain substantial edifice with a handsome front and the estimated expense is about 40,000. The situation of the building is extremely healthy and attached to it are all the conveniencies necessary to such an establishment. Prisoners of both sexes are admitted here who are properly separated and classed.”