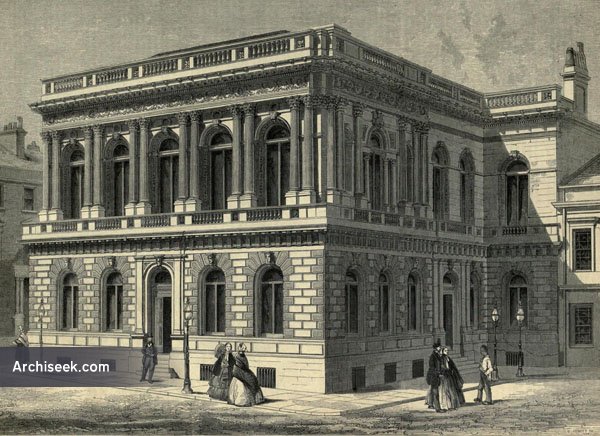 The Royal Faculty of Procurators is a body which was incorporated prior to 1668 and continues to serve the needs of the legal profession in Glasgow and West Central Scotland. Providing members with access to a large law library with significant holdings, and other facilities.

From The Building News: “This week we give an illustration of one of the many fine public buildings which have recently arisen to adorn the commercial capital of Scotland. Like many other public bodies in this vast city, having ancient rights and accumulated wealth, the Faculty of Procurators were desirous of possessing a place of meeting specially their own, and for this purpose have completed this building, the munificence and beauty of which, while it evinces their fine taste and princely magnificence, displays to full advantage the great artistic abilities of its architect, and the capabilities of the modern Italian style, when in proper hands, to adapt itself to every convenience of modern life. The construction of the building is of the most substantial character, the whole exterior walls being composed of polished freestone of a very fine quality, the shafts of columns in upper story are each in single stones, and all the floors are laid on brick arches, supported on cast-iron girders ; the girders under the upper floor are each 32 feet long.

The keystones of windows and doors in ground floor are ornamented with heads of many of the most distinguished Scottish law lords and lawyers. In the front to West Nile-street, beginning at the north window, are the carved likenesses of Lords Erskine, Mansfield, and Brougham ; in West George-street, of Lord Blair, John Erskine, Lords Stair, Kaimes, and Forbes ; in St. George’s-place are James Reddie and Professor Miller (both of Glasgow), then Lords Moncrieff”, Jeffrey, Cockburn, and Rutherford. Over the principal door is placed the head of Lord Jeffrey, and over the other that of Lord Stair, as if to remind entrants of the penetration and sagacity, the acumen and erudition, as well as the probity necessary successfully to master am! practise the difficult science of jurisprudence. On the keystones of the triplet windows at each end of library are placed carved shields with the armorial bearings of the Faculty.

The door in centre of front to West George-street opens on the lower hall, which is 29 feet 9 inches by 59 feet, having a clear ceiling of 17 feet ; this hall is used for the weekly sales of property, meetings of creditors and of the Faculty ; it is also entered from entrance-hall at door from St. George’s place. A spacious arcaded staircase and two large committee- rooms in the re-entrant angle of this place include the whole accommodation on this floor.

The library is immediately over the hall for sales, and is of the same dimensions ; it is divided in its breadth into a nave and two aisles : the aisles are vaulted from square Corinthian columns, but the ceiling of the nave or centre compartment is flat and at a greater height, namely, 24 feet 6 inches above floor, the space over columns from top of arches to flat ceiling being enriched with a full Corinthian entablature. This apartment, like the hall below, is lighted on three sides, the centre compartment having at each end a fine triplet window, as seen in the east and west elevations. The bookcases are placed between the pillars and the walls, and along the north wall, and in each bay between pillars are placed tables for the readers, the centre of room being left clear for meetings, &c. These book-cases and all the furniture have been made from the architect’s designs, of fine wainscot highly polished. The decorations have been very successfully carried out, the effect produced, whilst rich and magnificent in color, has that quietness and repose so essential in a place devoted to serious study. The columns are painted in dark green marble, highly burnished, the capitals and mouldings of base are gilded, and the walls are painted in imitation Venetian leather of a deep marine color, with a diaper pattern and border of a lighter shade, the ceilings are divided into panels and painted of a clear blue tint, the plaster enrichments of entablature and of bands on ceilings and arches being picked out in gold and colors.

As a whole, this building is compact and convenient in its arrangements, ornate but substantial in character, and while a great ornament to the city, is no less an honor to its talented architect, Mr. Charles Wilson, of Glasgow, a gentleman to whom that city is indebted for many of the finest structures which grace her streets.

The tradesmen engaged on the work were — masons, Messrs. Watson and Bruce ; wrights, Mr. James Connell ; plasterer, Mr. Daniel Smith ; plumbers, Messrs. Barbour and Stewart; slater, Mr. William Darrie. All the carving in stone was executed by Mr. Shanks in a highly artistic manner ; the keystone-heads were done from models by Mr. Handyside Ritchie, sculptor, of Edinburgh, and all the other ornament from models by Mr. James Steel, modeller, Glasgow. All the plaster enrichments were also executed from models by Mr. Steel, and deserve special commendation. Messrs. Hugh Boyle and Co. were the painters and decorators.