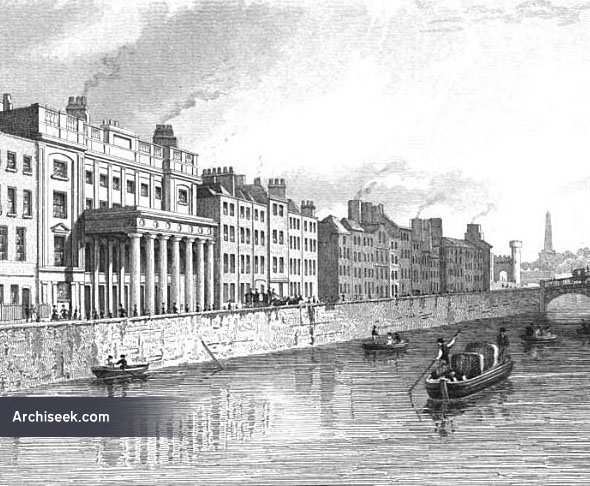 Home’s Hotel was opened by Scotsman George Home in 1826 but it only remained open for a few years. It’s fine Doric columned portico was a landmark on the quays. By 1840 it was a weaving factory run by the White Quakers. In 1848 it became the premises of James Ganley, Auctioneers who used it until 1977 when they moved to new premises. It was demolished shortly afterwards. The large Doric columns having been removed many years previously. 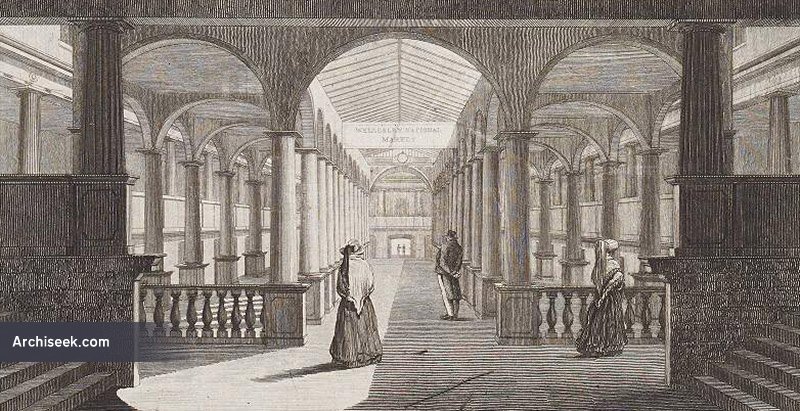 “This ornamental structure is situated on Usher’s Quay, and is likely to prove of considerable advantage to the manufacturers of woollens, silks, cords, and cottons in this country. It was erected at the sole expense of that enterprising, and really patriotic individual, Mr George Home, who built the Arcade in College green. The building contains upwards of eighty ware rooms, and in the centre an area of considerable dimensions has been fitted up as a public market, to be held on Tuesdays, Fridays, and Saturdays. In consequence of the low rents charged for the rooms. together with the advantage to be derived from thus concentrating the business of the various manufacturers. there can be no doubt that the erection of this fine building will ultimately be found highly beneficial in encouraging and promoting the sale of Irish manufactures. Adjoining the market is a public hotel containing upwards of 200 bed rooms, a coffee room &c. The charges are low and no gratuity is allowed to be given to the servants for their attendance.” ‘The New Picture of Dublin: Or, Stranger’s Guide Through the Irish Metropolis’, published in 1831