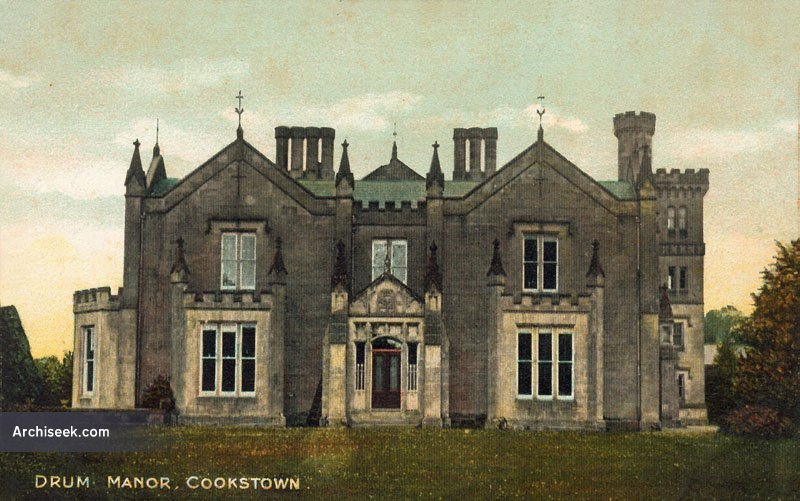 Rebuilt in 1829 by Major Richardson Brady in a heavily symmetrical and very flat “Regency Baronial” style. Later extended and romanticised by William Hastings who added a four storey tower, a new north front, and a gothic porch. He was also responsible for remodeling the interior around a great hall. This is all, alas, nothing but a shell. In an attempt to avoid incurring rates liability, the Forest Service demolished the mansion in 1975 and a ‘Japanese’ garden was created within the ruins.

“Oaklands, the residence of Lord Viscount J. Stuart, which forms the subject of our illustration for this No., has been rebuilt from the designs of Mr. Wm. Hastings, architect, of Belfast, by the well-known builder, Mr. John Murphy, also of Belfast.

The mansion has been planned with a large central hall as the chief feature, with which all the principal apartments communicate. This hall rises the full height of the building, and is lighted from the roof. On the level of first floor a gallery, about 6 ft. wide, runs entirely round the hall, carried on carved oak corbels, resting on stone caps built into the wall and elaborately carved ; from this gallery all the principal rooms on first floor are reached, and access to it is by means of the grand staircase of stone, having richly-carved stone newells and wrought-iron ballusters. In proximity to this hall is the large dining room, 33 ft. by 20 ft., and in connection with it are three reception rooms arranged en suite. These rooms occupy the front portion of the building (as seen in the view). A passage beside the grand hall leads to the minor portion of the building, comprising the necessary kitchen offices, housekeeper’s room, servants’ hall, butler’s pantry, &c. A back staircase leads to the apartments over this division of the building ; from the landing of this stair access is had to the first floor of tower, and from thence to the top by a circular stone stairs in turret. In the tower is situated the smoking room, and from the summit is obtained a splendid panoramic view of the surrounding country. The kitchen offices are grouped round a large kitchen court, thereby securing ample light and ventilation, &c.

Altogether the aspect of the building is extremely good, and the numerous breaks and projections produce a variety of light and shade which is very pleasing. A small portion of the old building has been retained — that occupied by the rooms in front, — and this has been remodelled to correspond in every respect with the new building.

The building is situated on an eminence, which adds much to its general effect. The building has been executed entirely of white freestone, quarried in the neighbourhood by Mr. Murphy at considerable expense, and as a specimen of it has been forwarded to us, we have no hesitation in saying that a more excellent building stone we have not yet seen, and it is certainly a matter of regret that it is not generally available.

The retention of the old portion of the building presented a difficulty to the architect which has been creditably overcome, as the old and new portions are in perfect harmony.

The cost of the building has been about 10,000, and we understand the work has been most carefully executed by Mr. Murphy, who had, as his representative at the works, Mr. Robert Flanagan, and the clerk of works was Mr. Henry. The plumber’s work was executed entirely by Mr. John M’Gee, of Ann-street, Belfast.” Published in The Irish Builder, November 15, 1869