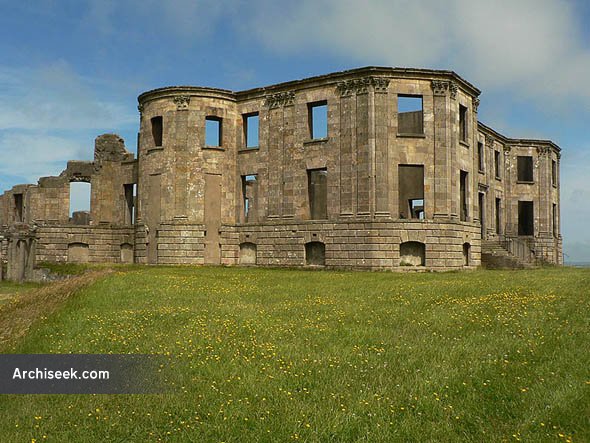 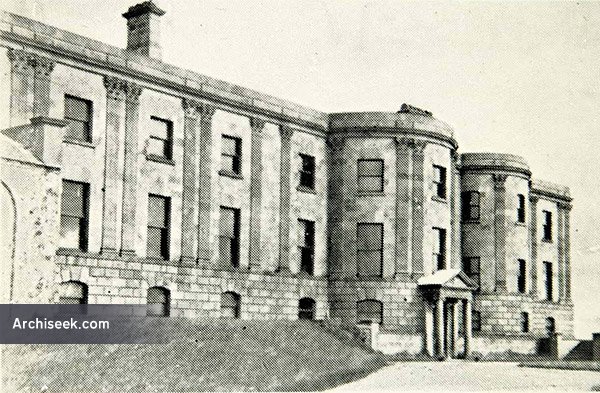 Frederick Hervey commissioned work at Downhill Demesne near the village of Castlerock in the early 1770s, after he was made the Bishop of Derry in 1768. Built by the architect Michael Shanahan, possibly to plans by James Wyatt. The construction of the House, and the nearby Mussenden Temple, cost an estimated £80000. It was of two storeys over a high basement, the principal front of three bays between two wide, three-sided bows; with two much-longer wings running back towards the sea, prolonged by office ranges. The long elevations of the wings were relieved by pairs of curved bows, ending with domes. From 1784 the front and the wings were given façades of granite ashlar, with giant fluted Corinthian pilasters on a rusticated basement.

In 1851 a fire damaged a significant part of the house and destroyed the library and some important artworks. The restoration of the house began in 1870 and continued until 1874 under John Lanyon, the son of Charles Lanyon, who maintained many of the original features, although some of the original layout was altered and additions made to the floorplan and decor. During World War Two, the house was used to billet RAF servicemen and women. By 1950, it had been dismantled and the surrounding land sold. 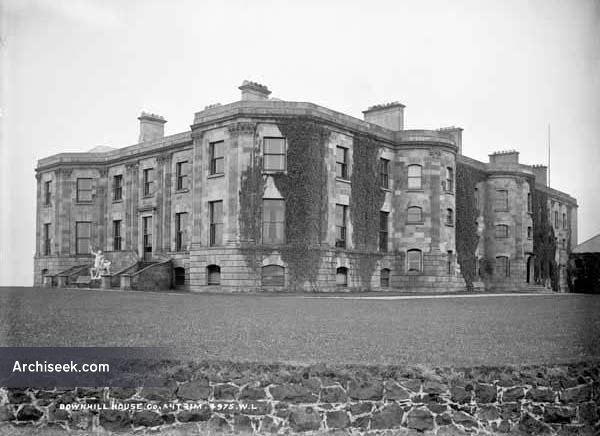 Described in Tours in Ulster a hand-book to the antiquities and scenery of the north of Ireland., published in 1854. “The former place, the late magnificent seat of Sir Hervey Bruce, was built by the celebrated Lord Bristol, Bishop of Derry. It was a truly noble pile, and has long shared a large amount of public notice. There was a noble library and picture gallery ; the former situated in the singular and beautiful Mausoleum Temple. Around the outside, in gilt letters, were the following verses from Lucretius: Suave mari magno turbantibus asquora ventes, E terra altereus magnam spectare laborem. In the view from the south this beautiful Temple is seen at the edge of the lofty cliffs, and just beneath, the railway emerges from a tunnel, with a very striking effect. This elegant tribute to the memory of the brother of the Earl of Bristol bore the following inscription around the inside, in gold letters : Ille meos errare boves, ut cernis, et ipsum, Ludere quae vellem calamo pennisit agresti. The beauty of the demesne is much spoiled by reason of the lack of trees, which gives it a naked appearance, and greatly injures the effect of the once noble mansion, for want of an umbrageous back-ground to give value to its fine architectural design. The picture gallery contained several pictures by Raphael, Poussin, Carravegio, copies from Titian, landscapes by Claude Lorraine, a Correggio, &c. This mansion was destroyed by fire about two years ago, and most of the pictures and library consumed. ”