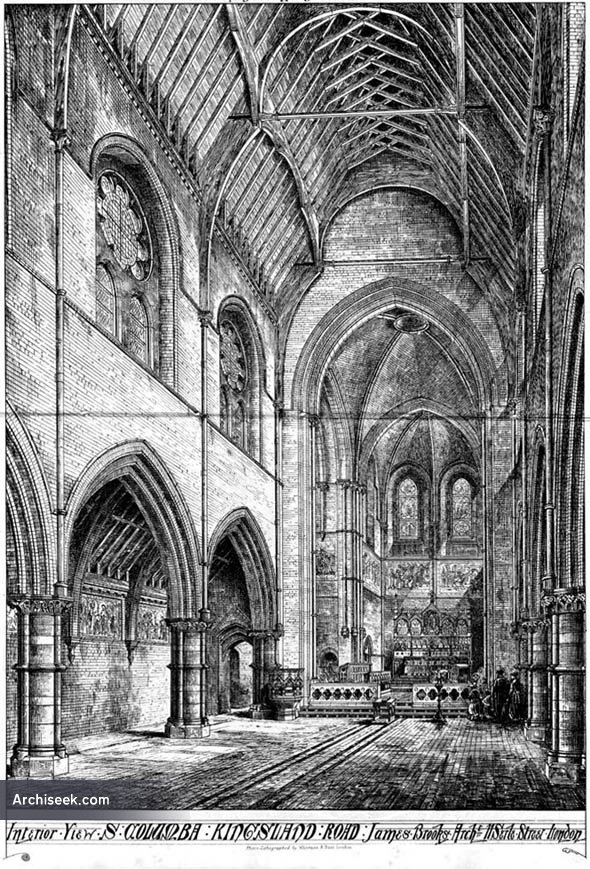 Built as a slum mission centre with a clergy house and school. The church has a pretty grim polychromic brick exterior – the adjoining structures being more attractive with their variety of roofs, dormers and a small tower. The church was declared redundant in 1975 on the union of the parish with that of Saint Anne, Hoxton. Published in The Building News, August 25th 1871. Listed Grade I.

“THIS church, one of the most characteristic and artistic productions of Mr. James Brooks, has been recently erected in the Kingsland-road, adjoining the Shoreditch Workhouse. In plan it consists of a nave of five bays, with clustered columns, narrow aisles, short transepts, central tower, and square-ending chancel, all built with red brick of pleasing tone. Here, as elsewhere, we notice the great width of the nave arcade, the studied simplicity of arch-mouldings and tracery, the dignity of proportion, solidity of the walls, and the vast height; details of construction as yet peculiar to Mr. Brooks. The walls of the unlighted aisles are divided into panels for containing the stations of the cross, by means of the brick arches which support the roof. The framing of the nave roof is left open, and the principals are brought down and supported by stone shafts resting on the cap of the nave columns. The chancel and sanctuary are groined in red brick, and open into the nave and transepts by very lofty and graceful arches. The sanctuary windows are placed very high, and underneath are panels for the reception of mosaics of incidents in the life of our Blessed Lord. These mosaics are also to be placed round the north and south walls. The total accommodation is nearly 1,200, and the cost about £10,500 ; but a large portion of this went in the foundations and in taking up and re-interring the dead. The church and schools are completed, and will, with the parsonage (which is to be commenced forthwith), form three sides of a quadrangle.”