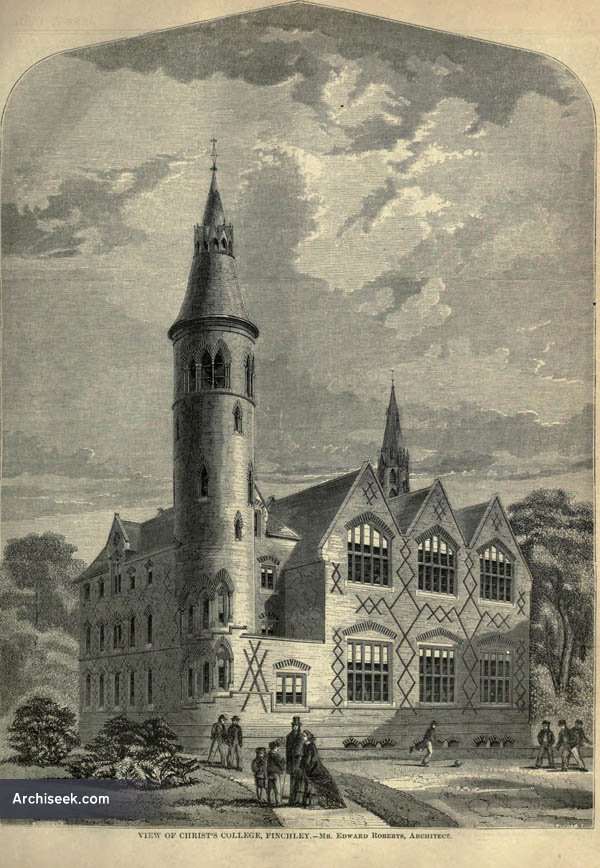 Christ’s College, Finchley is still a school today, on a different location from this building erected in 1860. For over 100 years CCF stood prominently in its second site in Hendon Lane, its green topped tower visible for miles around. It soon became one of the largest and most famous boarding schools in the environs of London. In 1990 they vacated this building for a new campus.

From The Building News, June 7, 1861: “THE remarkable increase in the desire for education, and the equally remarkable difference in the standing of the proprietors of schools, as compared with that of the last century, has led to a very large addition to the number and quality of scholastic establishments throughout the country ; and, fortunately, there has been coincidently a wonderful improvement in the style and comfort of the buildings erected to house the pupils. An example of this improvement we give in our present Number, and which is the first instalment of an intended large collegiate school.

The proprietor, the Rev. Thomas Reader White, M. A., the rector of the parish, feeling the want of an establishment of this kind, conferred with some of his leading parishioners, and the result was the taking of a large building, which many of our readers’ may remember in the old coaching days as the Queen’s Head Inn, at Finchley, but then imtenanted, and three short years ago the school was opened with four pupils.

It was proposed to give a sound classical and commercial education, with liberal dietary and accommodation, to the sons of professional men, at such a moderate scale of fees, to include books and every kind of expense, except medical attendance and clothing, as should merely reimburse the proprietor and secure him from loss. It is not our business to say what these fees are, nor what we think of the table and the instruction Were it a public or charitable school, we might have something more to say on these points ; but although we may add that success would appear to be the test of satisfaction, our duty is solely with the buildings newly erected.

Within a year after the opening, the numbers of pupils had so in-creased as to make it necessary to build a new school-room, and Mr. Salviu was employed, and erected a room (now the dining-room) and dormitories attached to the old inn. This did not prove sufficient. for the numbers still increased, and the rector decided on commencing a school on a larger scale on his own adjoining land, and upwards of 180 boys are now- housed in the old and new buildings, while the remainder of the dormitories and rooms being now completed, will together accommodate two hundred.

The principal floor is some five or six feet above the ground, and is approached by a wide flight of steps ending in a large landing covered by a pent roof. Here is a singular but good arrangement of a bell- pull and letter-box, covering two faces of the jamb. We enter through handsome oak doors and find ourselves in a corridor, ten feet wide, paved with red, black, and buff tiles, laid diagonally, with a black and red border at the end; there is a staircase tower, cylindrical, with 5 feet stone stairs. These rise easily and have a continuous oak han’^rail, the windows in the two lower stories of the tower are tripled and stepped to follow. the stairs.

Returning to the corridor we turn into a shorter one, at right angles, of similar width, having on each hand a room for masters, and enter the imposing school-room. This is 60 feet 6 inches long, 30 feet wide, and 24 feet high, lighted by three windows on the west, and one on the «onth.

The massively-framed flat roof of timber gives an appearance of magnitude which even those dimensions, large for the purposes of a school, would hardly give. We understand that the acoustic properties of the room are excellent; this is attributed to the braces and other timbers forming the broken surface of the roof, which, although of the largest scantlings obtainable, have by no means a heavy effect. The stone blocks, on which the hammer-beam posts rest, are to be carved into portraits of eminent scholars.

Opposite is the door to the play-ground, and on our left, three doors leading to class-rooms, each 20 feet square, the centre one having a large octagonal bayed window, with a reading table of appropriate design for the use of the monitors (or prefects, as they are here termed), this room being also the library.

Descending the stairs we come to a similar corridor to that above, but fitted with numbers of wash-basins for day and play-ground use, a door opposite leads us into ranges of waterclosets and urinals absolutely inodoor; on our right is the heating apparatus (Stewart and Smith’s), and the places for drying boots. Another door leads to a covered play-ground abundantly light and dry, it extends under the school-room and class- rooms, and is, therefore, about 60 feet by 50 feet, and 10 feet high.

There are two chamber floors, the upper one extending over the whole building, the lower one is diminished by the space of the school-room, which rises two stories in height. They liave both corridors of the same width as the others, arc paved similarly, and, like them, are fire- proof.

The temperature is equalized by felt and double boardings in the floors and roofs. The height of the ridges is 22 to 23 feet from the floor, and some idea may be formed of the space when we add, that in no part is there less than 600 cubic feet for each boy.

On each chamber story is a lavatory having the floors covered with lead, but with trellissed wooden flooring over it, where the boys stand. The brush divisions and other fittings are carefully studied, so as to ensure the greatest amount of comfort and convenience.

The upper lavatory has several baths, and hot and cold water is freely supplied. There are likewise water-closets on each story for night purposes if necessary.

From the main chamber story the tower is utilised by being converted into rooms, and a small turret stair rises hence for the means of ascent to them. Immediately over the large staircase is the hard water cistern, which contains upwards of 2,000 gallons, and is kept filled by means of a powerful lift-pump. The water is distributed thence to the closets and urinals, and there are provisions for refilling from the same cistern the soft-water tanks, should rain water chance to fail.

The two lower rooms of the tower are for masters, and the topmost is a view room, 90 feet from the ground, commanding views of great extent, while for the more venturesome, there is a higher view room, by 30 feet, in the roof. In part of the roofs of the main buildings are placed the servants’ apartments, and water tanks which receive nearly all the rain- water direct from the roofs, and convey it to the lavatories. Those tanks, together with those on the lower floors, will contain nearly 20,000 gallons of water.

Not an inch of space seems wasted, even the walls are filled with flues for one purpose or another, either warm or cold air, or for extracting drafts for foul air, which are upon Dr. Chowne’s patented syphon principle, all of them being under control by flaps and slides.

The present block of buildings shown in our view covers a space of about 100 feet by 60 feet. The next to be erected will be, as we under- stand, of about similar extent, and at right angles to this, thus forming two sides of the possibly future quadrangle. These contemplated erections will contain a large dining-hall (the present one being in the old house, and not sufficiently large). In this hall will be a dais, where a tabac will be spread for those friends of the boys who desire to satisfy themselves how they fare,— a chapel, a swimming bath, and extensive offices. The dormitodries in that part will be divided into ” cubicles.”

The various materials adopted in the construction of the works are, for the walling, red bricks from Faversham, with Staffordshire black headers built in, in diagonal, but varying and even accidental patterns. The arches of all kinds are of black tiles, in indented forms, radiating and alternating with red bricks ; these have a picturesque effect and are consistent with the brick header work. The stonework is of Messrs. Randell and Saunders’ Box groundstone. The failure of the quarries of green slates induced some change in the design in that respect, and there is now a variegated roof of green and purple slates in simple large patterns. The air openings have the monograms of the architect and proprietor alternately.

In the interior the walls are throughout covered with Portland cement mixed with the local yellow sand. It is worth mentioning that some internal walls which were for lightness built of Beart’s perforated bricks appear to be showing defects which lead to the conclusion that they are not suitable for that kind of plastering. We have recently been informed that from experiments they are found to be more absorbent than stocks ; this may partly account for the non-adhesion of the cement where the bricks are not properly wetted ; the school-room walls are relieved with bands of marone-colored glazed tiles, the other parts with large flush beads.

The whole of the timber work has been repeatedly oiled and the joinery polished, there is not a particle of either staining or paint about the place, except to the ironwork. The wood has been carefully selected from red pine and yellow deal, and the result is a rich, though perfectly natural effect. The ground-floor doors have the outer margins inlaid with narrow widths of walnut in diaper work. We observed that there is none of the common ” stop ” chamfered work. The chamfers are either run out or there are mouldings with square ends.

The windows are all of metal, and alternate lights are so arranged by a special process designed by the architect, that one lever opens the whole vertical set with scarcely more than the height of a finger.

All the floors and roofs are open timbered and elaborately framed, but the roofs, throughout with curved ribs, are all unchamfered ; all the floor timbers are chamfered, and every visible part is planed.

In the details and fittings great care has been taken to provide every- thing of the best that could be obtained of their kind. The locks are provided by Messis. Hobbs and Co. The plumbers’ fittings are either by Messrs. Guest and Clirimcs or Messrs. Tylors. The ironmongery Is all of wrought-iron or bronze made by Messrs. Hart. The drains and urinals are by Jennings.

We were pleased to see, besides the dry play-ground and the quadrangle, a Held of 5 or C acres being well drained for the boys’ field sports. The masters and matron take their meals with the boys, and partake of the same fare, and we can personally testify to its excellent quality.

The architect is Mr. Edward Roberts, F.S.A., of Parliament-street ; and the builders are Messrs. Dove Brothers. The contract was taken at nearly £5,000, which was for scarcely more than the shell. The plastering, paving, plate-glass (with which all the windows are filled), and other works being done at scheduled prices. The continuing necessity for enlargement caused the addition of the mezzanine story while the works were in progress and it is likely that with the fittings these additions will considerably add to the outlay’.

Near to the College is the pretty Lodge to Grass Farm designed by the same architect, the drawing of which we took occasion to notice in the Architectural Exhibition of 1859.