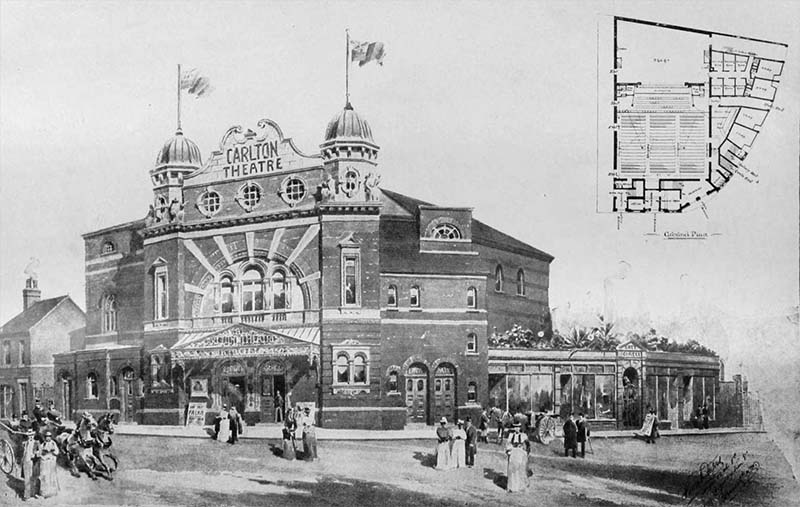 The Carlton Theatre on the corner of Saltley Road and Nechells Place, Birmingham was designed by Thomas Guest at a cost of £14,000. The Theatre opened on the 16th of July 1900 with a Variety performance. In 1921, it was converted into a full time cinema, and re-named Coliseum Theatre. Disaster struck in 1941, when a German bomb destroyed the cinema, killing 19 people. The remains of the theatre were demolished in 1945.

“This building is being erected on an imposing site at the corner of Saltley-road and Nechells Place, at the penny steam tram terminus, Saltley — one of the suburbs, although within the city boundary. It will be conducted upon popular lines, and the prices charged will be the.so equal to such theatres. The building itself will accommodate upwards of 2,UO0— in the pit, which is 58ft. 6in. by 57ft., 700, the gallery 700, circle 400, stalls 100. The stage is 27ft. by 35ft., and is 22ft. to the fly-floor, and 41ft to the grid floor. The proscenium opening is 27ft. wide and 28ft. high. There are six dressing-rooms on tho same level as the stage. Internally the theatre will be decorated in model plastic work, picked out in cream and gold. Complete electric-light installation will be put down, supplemented by a complete gas service. The front line of the site is one long sweep ; in consequence of this the chief front has been treated independently of the main building, and is placed immediately at the corner. On the left facing Saltley-road are the pit and gallery entrances, and on the right are the gallery and circle emergency exits. Next Nechells-place the site has allowed of four shops being erected. The circle level in the front provides handsome staircase, foyer, manager’s office, and refreshment room, with lavatories, etc, and access is provided from this level to the roofs of the shops, dressing-rooms, and pit refreshment-room, which are covered in with concrete flat, and will be converted into a winter garden illuminated with electric light. The elevations are being carried out in Kingswinford facing bricks and buff terracotta from Hathern Station, and the work is being rapidly proceeded with by Mr. T. Johnson, of Great Brook-street, under the direction of the architect, Mr. Thos. Guest, Cobden Buildings, Corporation-street, Birmingham. The entire cost of the building, including furniture, is upwards of £1,400.” Published in The Building News, December 22 1899.