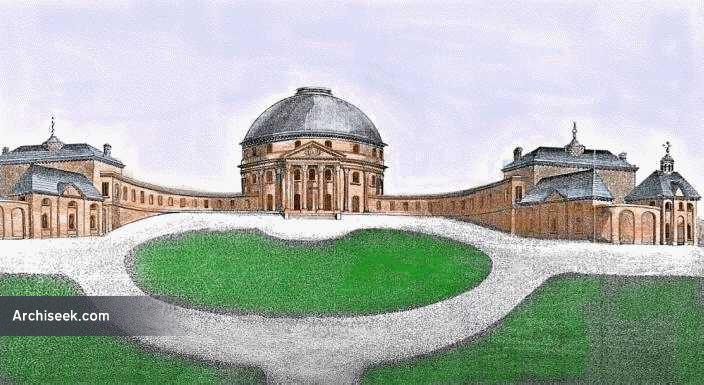 Ballyscullion House was one of three eccentric palaces built by the equally eccentric Frederick Augustus Hervey, 4th Earl of Bristol and Lord Bishop of Derry. The other two were at Downhill, also in Derry; and Ickworth in Suffolk. Building on the house began in 1787 and, like Ickworth, its predominant feature was a central, domed rotunda joined by curved sweeps to rectangular pavilions. The central rotunda was virtually completed but circa 1803/1804, it was almost completely dismantled to avoid the alleged application of the ‘window tax’ which was introduced during the Napoleonic Wars to pay for the war with France. The building had a huge picture gallery, and parts of the interior were decorated with marble especially imported by the Bishop from Italy. The “palace” is described in Charles Lever’s book “The Bramleys of Bishop’s Folly”, published in 1899. Some of the stone was later used to build another house at Ballyscullion.

Ickworth House was begun in 1795, the house was still unfinished when Hervey died in 1803 and was completed by the 5th Earl of Bristol. As such, the design at Ballyscullion probably was the prototype, as its construction started in 1787 with the design possibly a year earlier. The front of Ickworth House is over 600 feet long, and the rotunda is over 100 feet high. The rotunda was based on the designs of Mario Asprucci, an Italian architect; the architects who adapted the design and oversaw construction were Francis Sandys and his brother Joseph Sandys.