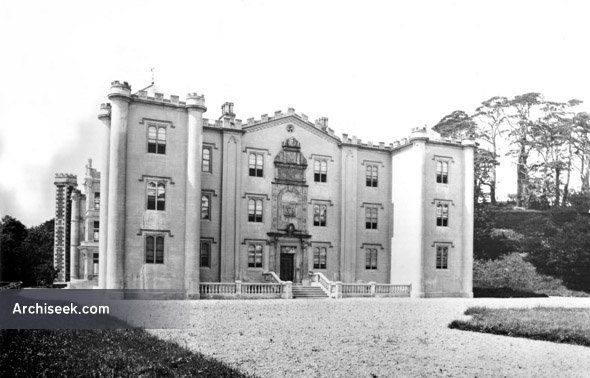 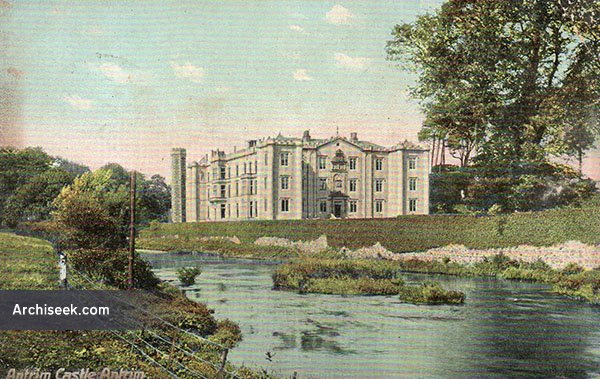 The original Antrim Castle, now a ruin, was originally built in 1613 by Sir Hugh Clotworthy and enlarged in 1662 by his son, the 1st Viscount Massereene. The Castle, as country house was built in 1813 as a three-storey Georgian-Gothic castellated mansion.

The original doorway, most elaborate and ornate and complete with Ionic pilasters, heraldry and a head of King Charles I became a central feature of the new 4-bay entrance front, with a long, adjoining front of 180 feet with 11 bays; mullioned oriels and a tall, octagonal turret were added in 1887 when the Castle was again enlarged. Destroyed by fire in 1922, during a dinner party and ball, when it was supposedly stormed by insurgents. Many interior fittings were saved but the house was never rebuilt. It is said that the insurance was never paid out, as the owners couldn’t prove arson to the satisfaction of the insurance company. The castle remained as a ruin until its demolition in 1970, with the tall turret of 1887 remaining.

From: J.P. Neale, Views of the seats of Noblemen and Gentlemen in England, Wales, Scotland, and Ireland, Second Series, vol.II, London, 1825
“ANTRIM CASTLE adjoins the town from whence it takes its name; a view up the principal street of which is commanded from the parapet of an adjoining terrace garden, ascended from the Castle yard by a handsome flight of stone steps. It is inclosed from the town by a Gateway, and stands on a walled terrace, overhanging the river Ovenoeen, or Six -mile Water, which flows into the vast waters of Lough Neagh, within sight of the Castle, at about the distance of a quarter of a mile.

This Castle is among the few found to be preserved in Ireland, of those erected in pursuance of the injunctions of the grant made by James I. for the protection of the colonies, or plantations then about to be esta blished . The building was raised, as appears by an inscription on a large carved mantel of stone, covering the centre of the principal front, in the year 1613, by Sir Hugh Clotworthy, and has been subsequently altered according to the different tastes of its successive proprietors. The front of the Castle is also decorated with the armorial bearings of the family, and those of their alliances, surmounted by the royal arms of England , and a carved head, in relief, of Charles I.

From the family of Clotworthy the Castle descended to that of Skeffington, by the marriage of Sir John Skeffington, of Fisherwick, in the county of Stafford , to the only child of Sir John Clotworthy, after wards created Viscount Massereene, with remainder to Sir John Skef fington, and the heirs general of that marriage, and is now in possession of Viscountess Massereene, only child of the last Earl of Masse reene. The marriage of that lady with the Right Hon. T. H. Foster, of Collon, in the county of Louth, only son of John, Lord Oriel, and now Viscount Ferrard , whose family name was changed to that of Skeffington in pursuance of the will of the late Earl, has again given this fine family seat to descend in the female line. The suite of rooms is extensive and modern, the entire Castle having undergone a thorough repair in the time of the last Earl of Massereene. The exterior towards the Court has been recently restored by the present possessor to the character of the period in which it was originally erected.

Few places in Ireland command greater power of beauty, or extent of drive. Its demesne and deer-park stretch along the shores of Lough Neagh for above two miles, ornamented with fine old timber and copse wood, covering every head- land, down to the water edge, with various plantations, calculated to blend in the scenery of as rich and highly cul tivated a county as any to be found in Ireland. The view over the Lake towards the south is bounded only by the horizon , while towards the west it rests on the distant Tyrone and Derry mountains, and the nearer woods of Shane’s Castle, the ancient seat of Earl O’Neile, whose towers project into the lake itself. These two fine domains, indeed, embrace, with their woods and pleasure grounds, the whole of the Bay of Antrim , an extent of six or seven miles.

The Gardens are on the same side of the river with the Castle. An ancient Bridge of six arches, represented in the plate, leading to the Park and outgrounds, is overlooked by one of those old mounts , as cended by a winding path, erected in strict accordance with Bacon’s no tions, being, as he recommends, “ some forty feet high .”

The Gardens are fast restoring to their ancient form by the proprietor, and at present this mount exhibits a considerable extent of what is de signated French gardening, consisting of terraces , ponds, alleys, clipped hedges, and parterres of flowers. The finest specimen, probably, of the Basaltic columns of the Giant’s Causeway to be met with, has been lately placed at the termination of one of the alleys, and serves as a seat, upon a very large scale.”