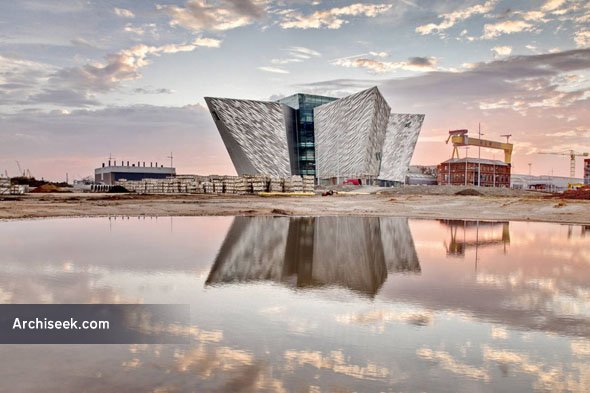 Titanic Belfast is the centrepiece of the £7bn Titanic Quarter development, one of Europe’s largest urban waterfront regeneration schemes which is turning a 185-acre site on the banks of Belfast’s River Lagan into a new mixed use maritime quarter with a mile of water frontage. Titanic Belfast features nine interpretive and interactive galleries that explore the sights, sounds, smells and stories of Titanic, as well as the City and people which made her. It is the world’s largest Titanic exhibition. Visitors will learn about the construction of RMS Titanic and the wide and rich story of Northern Ireland’s industrial and maritime heritage.

Commissioned to begin work on the project in August 2008, Todd Architects has overseen one of the most ambitious and challenging construction programmes in the UK and Ireland. The 14,000 sq m building took three years to complete – the same length of time as Titanic itself – and is designed with the potential capacity to accommodate up to 1m visitors annually.

Paul Crowe, Managing Director of Todd Architects, commented: “Todd Architects has invested almost four years of work into this truly global project delivering a building which has changed Belfast’s skyline and will help transform international perceptions of the city itself. Developing a building that reflected the ingenuity, ambition and scale of Titanic has been an immense professional challenge – one we are delighted to have met.

“Titanic Belfast has a complicated geometry, providing a challenging build programme which required ground–breaking construction techniques. Its stand–out exterior façade, which replicates four 90 ft high hulls, is clad in 3,000 individual silver anodized aluminium shards, of which two–thirds are unique in design. The resolution of the geometries involved required the use of sophisticated 3D–modelling, completed by Todds in–house, in a process of ‘virtual prototyping’ which we developed specifically for the project.”

Todd Architects’ roles in Titanic Belfast were wide ranging, from chairing design team meetings liaising with independent technical advisor teams to co–ordinating specialist lighting designers, fire engineers and acousticians. The project has required some 900 individual Production Information Drawings from Todd Architects, excluding sketches, some of which have been issued with over thirty revisions.

“Titanic Belfast also incorporates the best design and technology available. For instance, the building adopted an integrated design approach in line with the Intergovernmental Panel on Climate Change Working Group III Guide Lines and is on course for a BREEAM Excellent status. Plus, like Titanic, the project was completed on budget and to a strenuous time constraint which demanded completion in advance of the forthcoming centenary of the Titanic’s maiden voyage in April 2012.

“This is a landmark development for Northern Ireland which we believe will demonstrate the ability of iconic architecture to shape internal and external perceptions. Belfast has come far in the past 15–years and a statement building such as Titanic Belfast reflects and reinforces the city’s renewed sense of civic pride and cohesion.”