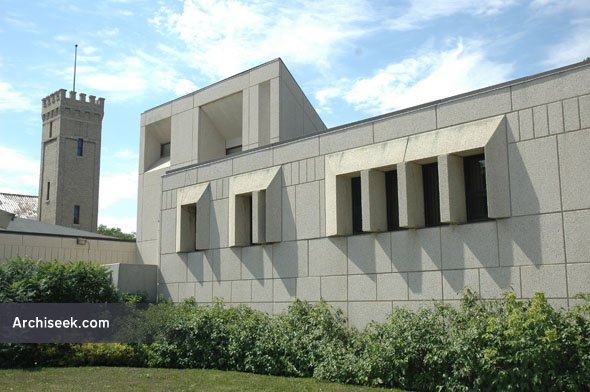 Designed to contain a police station, law courts, and a public health centre, this cluster of buildings is sited around an open sided courtyard adjacent to the former city hall. Ten years after construction, the amalgamation of St. Boniface into Winnipeg, meant that the police station became Winnipeg Police Station No.5. It performed as such until relatively recently. The law courts element of the centre still operates as the French language court in the city.

The court building is a three storey split-level building with a magistrate’s court, administrative offices, a forensic laboratory and a jail that housed up to 24 people. Though the jail and lab are closed it still functions as a courthouse. To one site, there is access to a subtteranean garage, with a cell block alongside. The former health centre block has been repurposed for use as the offices of a local winter festival. At some point, it received a rather unfortunate red on its roof, which detracts from the entire complex.

With it’s deeply recessed and hooded openings, the complex is a strong statement in Brutalist architecture. The massing of the central entrance way suggests the towers and focal points of municipal buildings of the past – a strong element in itself but also subservient to the adjacent Hotel de Ville and Fire Station.