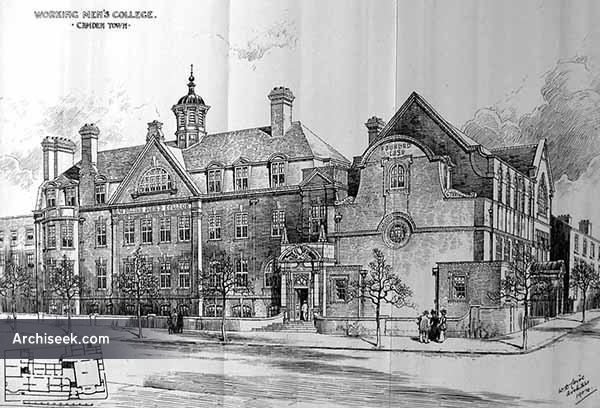 Working Men’s College is the oldest surviving adult education institute in Europe, was founded in 1854 and was associated with the Cooperative Movement and the Christian Socialists, stemming, from the same tradition that led later to the Worker’s Educational Association. The physical structure of the building was designed to reflect that found within university colleges. Large common spaces, Library,[9] Common Room, Hall, Museum, and later The Charles Wright Common Room, promoted social and intellectual interaction between student, teacher and staff Members of College. There was no separate staff room. Specialist rooms such as science laboratories art and craft studios, lecture theatre, and a gymnasium were added in the 1930s, reflecting a desire to provide a broad educational experience.

The Working Men’s College foundation stone inscription reads: “This first stone of the new home of The Working Men’s College was laid by H.R.H. The Prince of Wales on the 16th of July 1904 The Jubilee Year of the College. In memory of Frederick Denison Maurice and of those who worked with him and followed in his footsteps. Albert V. Dicey KC Principal / Reginald J. Mure M.A. Chairman of Building Committee / William D. Caroe M.A. Architect” Published in The Builder, February 8 1906.