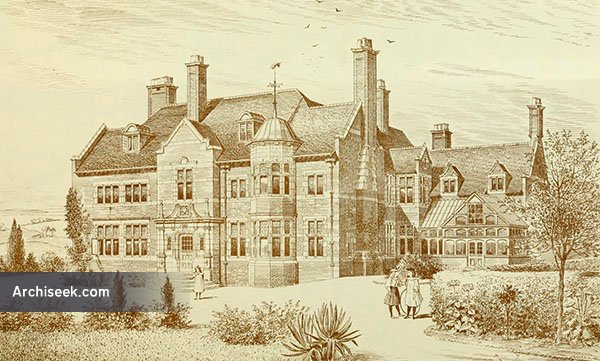 “This country house, the residence of Mr. A. Vaughan Stevens, has lately been erected on the site of a former building which two or three years since was destroyed by fire. The new house, as shown by the accompanying plans, is entirely unlike the previous one, though the foundations of the original building determined the shape on the plan of the leading walls of the present one, with a triflng extension at the end of the billiard hall, and of the cloak-room and pantry to the rear. The roominess and spaciousness of plan, coupled with the isolation of the kitchen and servants’ departments, which are also contrived for ready service, may thus briefly be referred to. The building is in red brick, with Portland stone entrance, and St. Aldhelm quarries Bath stone dressings elsewhere, the roofs being covered with tiles. The windows are throughout fitted in the transomed lights with metal casements, by Jlessrs. Wenham and Waters. The Cadogan Ironworks supplied the steel girders. The quarried and shaped glazings were executed to special patterns by Messrs. Adam Heaton and Co. The carving was done by Mr. Nathaniel Hitch. The purpose-made copper furniture was supplied by Messrs. Hart, Son, Heard, and Co., who did the wrought-iron work. Oak floors are laid in all the best rooms, and American white wood, stained dark oak, is employed for the joinery where oak itself is not used. The chimneypieces were supplied by the Coalbrook Dale Company, where special ones were not introduced. The white and black marble paving was supplied by Messrs. Farmer and Brindley.”