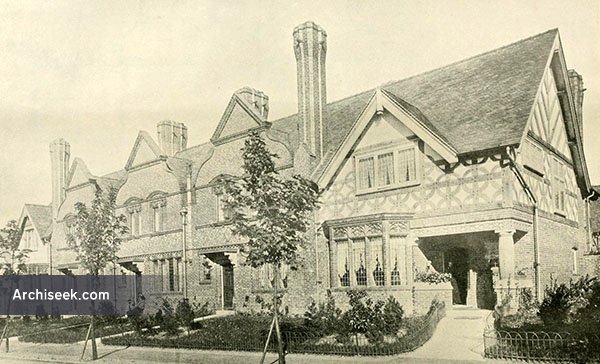 “One of the most complete settlements erected in modem times is the village at Port Sunlight, where the proprietors, Messrs. Lever Bros., have built some three hundred and twenty-eight houses already, in occupation by a population of between 1,500 and 1,600 persons, all of whom are engaged at the works hard by. At the present time 112 houses in various stages of completion are in hand. The distinguishing feature beyond the notable extent of the undertaking is the picturesque and varied character of there buildings, several leading architects having been engaged by the proprietors for the preparation of the designs thus realised or about to be put in hand.

Among these we may name Messrs. Ernest George and Yeates, Douglas and Minshull, Ernest Newton, William Owen, Lockwood and Sons, Maurice B. Adams, Edmund Kirby, E. J. Lutyens, Grayson and Ould, and others. Such a list of well-known names is a sufficient guarantee of the architectural quality of these dwellings and various village buildings thus deserving of mention in connection with the series of illustrations which we commence to-day in the Building Xews.

The estate comprises 200 acres, of which 60 acres are reserved for the factories and works. Portions of the village have been set apart for recreation grounds, and also a park. One feature of this industrial homestead is that every villager desiring it can have an allotment garden — an advantage of which the majority of the tenants have availed themselves. The promoters have adhered to the principle of “prosperity sharing,” with which the scheme was inaugurated some few years ago, and this practical method of mutual advantage takes the form of building each year a certain number of cottages, which are let to the work people at low rentals, so as to provide for the payment of rates, taxes, cost of maintenance and repairs without providing any direct return on the capital expended on erecting the house =, or sunk originally in the purchase of the land.

The roads are set out in picturesque contours, and are enriched by well-established trees, some of the older poplars, oaks, and plantations, all of which are well preserved, being part of the historic estate on which this interesting colony has been developed. The accompanying views will afford our readers a good idea of the old- world character which has been imparted by the methods and men employed in realising this very up-to-date and prosperous undertaking. Besides the houses of varying accommodation for the different classes of artisans, there are dwellings for clerks and other employees.

A big school has been built for boys .and girls, and another for infants. The large central hall of these educational buildings, of which Messrs. Douglas and Fordham wore the architects, has a chancel attached to it, and divided off by a movable partition, so that regular church services may be held on Sundays and festivals. A clock-tower and spire attached to this group add quite an ecclesiastical character to the design. There is a stone-built bridge, recalling some artistic historic example, leading to Bridge -avenue, and the village Institute, where entertainments are held, makes another quaint addition to the place, to say nothing of its popularity. The cricket pavilion and club, too, make very prettily designed buildings, and the village shop, also in the half- timbered style, must be mentioned. We give a view of it, and plans of the adjoining cottages, as well as the plans of some others, which are illustrated. We shall give further drawings shortly.” Published in The Building News, November 4, 1898.