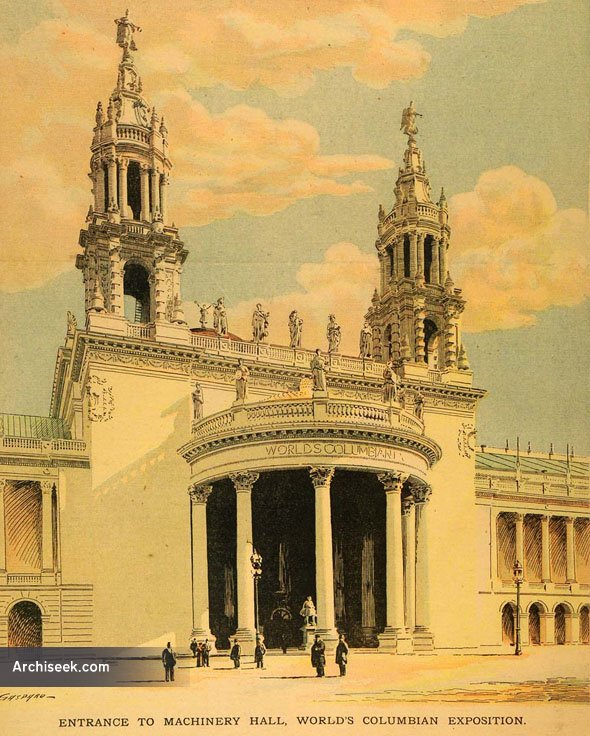 The World’s Columbian Exposition was held from May to October 1893 in honor of the 400th anniversary of Columbus’ discovery of the New World. After competition with other cities, Chicago was finally designated the official site and the Exposition was built on 630 acres in and around Jackson Park. Designed by Daniel Burnham and Frederick Law Olmsted, it was intended as the prototype of what Burnham and his colleagues thought a city should be. It was a spectacular display of progress and prosperity, and included among its many wonders were electrical displays, exhibits from other countries, and a popular amusement area on the Midway Plaisance with carnival rides. Most of the fair’s architecture was based on classical design and lathered with white paint which gave the area around the Court of Honor the name “The White City.” Dedication ceremonies for the fair were held on October 21, 1892, but the fairgrounds were not actually opened to the public until May 1, 1893. The fair continued until October 30, 1893.

The White City is largely accredited for ushering in the City Beautiful movement and planting the seeds of modern city planning. The highly integrated design of the landscapes, promenades, and structures provided a vision of what was possible when planners, landscape architects, and architects work together on a comprehensive design scheme. The success of the exposition inspired the Merchant’s Club of Chicago to commission Burnham to create the Plan of Chicago in 1909.

Almost all of the fair’s structures were designed to be temporary; of the more than 200 buildings erected for the fair, the only two which still stand in place are the Palace of Fine Arts and the World’s Congress Auxiliary Building. The World’s Congress Building was one of the few buildings not built in Jackson Park. Instead it was built downtown in Grant Park and now houses the Art Institute of Chicago who part-funded its construction.

Three other buildings survived the fair: the Norway pavilion, a building preserved at a museum called Little Norway in Blue Mounds, Wisconsin; the Maine State Building now at Poland Spring, Maine, and on the National Register of Historic Places; and the Dutch House which was moved to Brookline, Massachusetts.