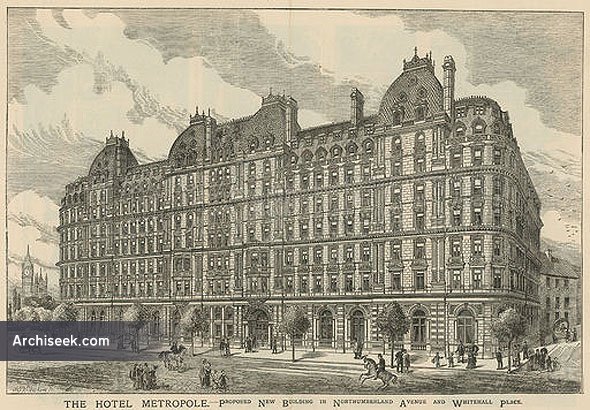 The Hotel Metropole, proposed new building in Northumberland Avenue and Whitehall Place; from The Graphic, 14 July 1883. Constructed for the Gordon Hotels Group which at one time had three hotels on Northumberland Avenue – The Grand, The Metropole and The Victoria – aimed at American and European visitors to London. The hotel’s 88 page brochure claimed: “That the hotel’s location is particularly recommend it to ladies and families visiting the West End during the Season; to travellers from Paris and the Continent, arriving from Dover and Folkestone at the Charing Cross Terminus; to Officers and others attending the levees at St James; to Ladies going to the Drawing Rooms, State Balls, and Concerts at Buckingham Palace; and to colonial and American visitors unused to the great world of London”.

The Metropole’s close location to Whitehall and the Palace of Westminster meant that it was commandeered in both World War I and World War II. Post World War II, it was purchased by the Ministry of Defence and used as government offices until it was declared surplus and sold by Crown Estates in 2007. It was then restored as a luxury hotel and renamed the Corinthian Hotel London.