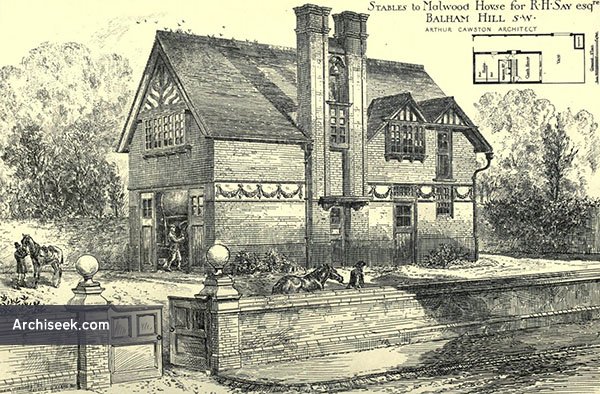 “With regard to these stables is that although they are being built within 10ft. of a public road at Balham, on land under the supervision of the Metropolitan Board of Works, yet they are exempt from the Metropolitan Building Act. This being the case, the architect has had the rather rare opportunity of building a country stable in the midst of Londoners, and the contrast between the building and those around is rather striking. The materials used are red brick and tiles ; the plaster work in the gables is rough-cast, which has been very successfully managed, and has dried a perfectly white colour. All the woodwork is stained dark, but the general dark colour of the building is well relieved, not only by the rough- cast in the gables, but by the band of buff terra-cotta, 2ft. 6in. deep, which runs aU round the building between the red bricks and the tile-hanging. Instead of the coach-house doors being hung, and thus liable to being blown to pieces with the wind, they run one behind the other on Hatfield’s patent moving axle rollers. The wheels were supplied by Messrs. Hart, Peard, and Son, of Wych-strcet, Strand, and the whole works are being executed by Messrs. Bowyer. Published in The Building News, April 8 1881.