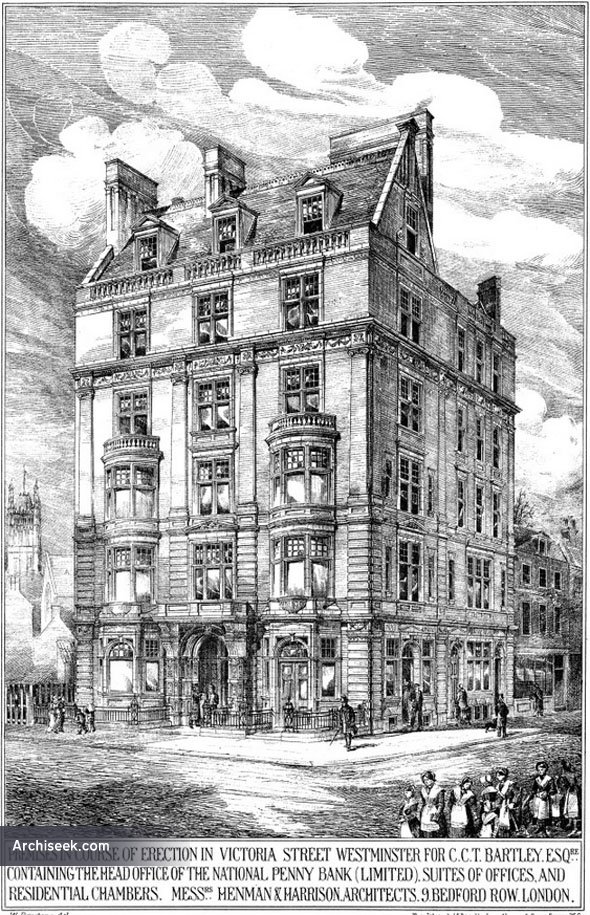 Described as “Premises in course of erection for C.C.T Bartley inc., containing the Head Offices of The National Penny Bank Ltd., suites of offices and residential chambers” Published in The Building News, August 1st 1879.

“This building, which is in course of erection, will contain the head offices of the National Penny Bank, Limited, a residence, five suites of offices, and a set of residential chambers. It is being erected by G. C. T. Bartley, Esq., and several gentlemen interested in the National Penny Bank, especially to set its requirements, though beyond taking a lease of the part required, that institution undertakes no responsibility, and pays no part of the cost of the building. The irregular form of the site, combined with the varied requirements of the building, presented many difficulties in the planning, which have, however, been overcome with success. The bank is on the ground floor ; it consists of an 1_ shaped room, whose extreme dimensions are 2O’ 0″ by 30′ 0″ ; to the rear is a committee-room, top lighted, ’20’ ‘ by 1 6’ 0” ; in the basement is a strong room for the books, also store-rooms, lavatory, &c. The porch in the centre gives access to two entrances and staircases, one for a residence ; the other for offices and chambers. The materials are red brick and buff terra-cotta with brindled tiles on the roofs. Dennett’s arches are used for the fire-proof floors. Mr. H. A. Davis will supply the lifts, viz., a book-lift to the bank, a dinner-lift to the residence, and a passenger-lift, which -will servo the offces, chambers, and residence. Messrs. Gibbs and Canning are the terra-cotta manufacturers, Mr. Gamble having prepared the models for the enriched portions. The clerk of the works Is Mr. Charles Smith, the builders Messrs. Atchison and Walker, and the architects Messrs. Henman and Harrison, of 9, Bedford-row, London.

With regard to that portion of the building which is to be used by the National Penny Bank the following facts may be interesting. The first branch was opened at Edgware-road, in October, 1875, and since that time twelve other branches, open every evening, have been established in different parts of London, including the Penny Bank specially erected for the company in Great Eastern-street, Shoreditch. “