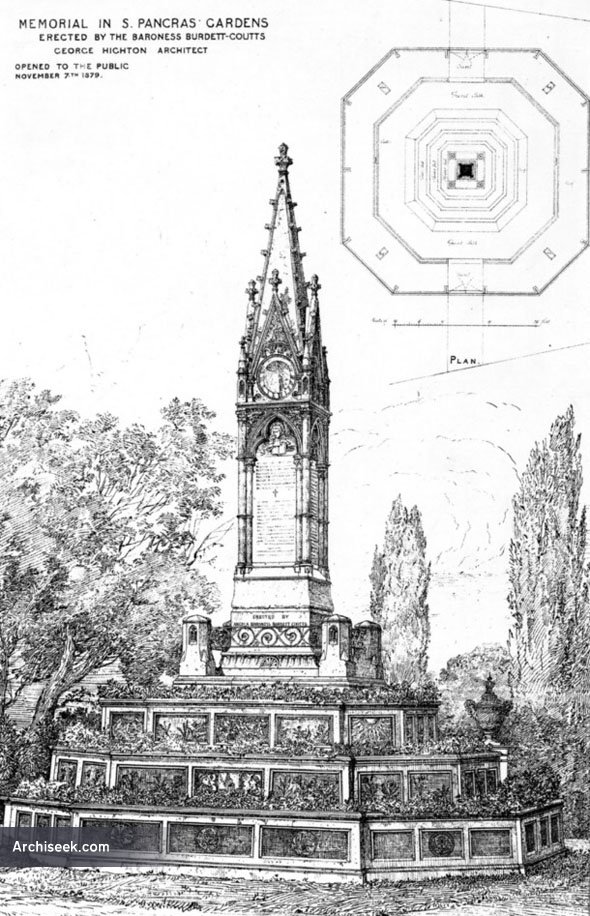 This memorial sundial, which is a Grade II listed structure, was unveiled in 1879 by Baroness Burdett-Coutts (1814-1906), a great Victorian philanthropist who sought to rid London of its slums.It lists the names of a number of eminent persons buried within St Pancras Gardens. The memorial is constructed of Portland Limestone, marble, granite and Red Mansfield Sandstone. The whole structure is enclosed by cast iron railings with Portland Limestone statues at each corner. Published in The Building News, November 7th 1879.

“THE memorial which we illustrate in our present number has been erected by the Baroness Burdett-Coutts. Many of our readers will know the site, and remember the dilapidated condition the burial grounds of St. Pancras and St. Giles were in a few years since, and the difficulties of preserving, with due respect, the ground which had afforded for centuries a resting-place for some of the most illustrious personages of their age — English, French, Spanish, and Italian. The last interment took place in 1853, and from that time to 1875 the burial grounds remained in a neglected state from want of funds where- with to lay them out and preserve them in proper order. The Vestryy of St. Pancras had an excellent object in view when they proposed the conversion of what was, particularly in the midst of a populous district, an unsightly spectacle, into the present memorial gardens. The movement was warmly approved by the ratepayers and the public generally, and also by her Ladyship and His Grace the Duke of Norfolk, who joined heartily in successfully opposing the Midland Railway Company in 1875 in their endeavour to pass a Bill in Parliament to acquire the residue of these grounds for railway purposes. The sympathies of the baroness with the project for utilising the grounds for the recreation of the public, especially of the poor in the neighbourhood, and for the preservation of the names of those eminent persons whose remains have been buried therein, have been practically evinced by the erection of a memorial to fittingly record the names of some of those celebrities whose memory should be handed down to posterity. The gardens were opened on the iSth June, 1877, by Sir James Me Garel-Hogg, M.P., Chairman of the Metropolitan Board of Works, and on the same day the baroness laid the foundation-stone of the memorial, now completed and depicted by us. The superstructure, which is in the Early Decorated style, consists mainly of Portland stone with four marble tablets, and clustered granite columns at the angles. The tablets are surmounted with reliefs representing St. Pancras and St. Giles, also Night and Morning, by Signer Fucigna. On the tablet under the dial are inscribed the Beatitudes and the following lines : —

*Here in Christ’s acre where this dial stands,
With pious care and borne by reverent hands,
Lone wanderers garnered in from east and west
Among the home-loved lie in solemn rest ;
Severed in life by lineage, race, faith, clime.
They bide alike the last soft stroke of time ;
And when God’s sun, which shone upon their birth,
Ends his bright course and vigil o’er the earth,
“When o’er this disc that day’s last shadows flee.
And ‘ death no more divides, as doth the sea,’
The dead shall rise — retake the life God g.ave,
Creation’s Saviour bless earth’s opening grave, thy word hath writ the blest — no conscience clear
In thought and word, all must Thy judgement fear —
Only one own wise words, which fashioned prayer “When life was parting, still move the ambient air.
Pleading that God, who made, will giant that we May with the pm-e in heart the Godhead see.”

On the reverse side the tablet is thus headed: —
“These grounds, formed out of the building-ground of S. Giles and the churchyard of S. Pancras, are assigned for ever to the loving care and use of the parishionere.”

*Hereon are inscribed some names, English and foreign, which have an interest for all time. This dial is, however, especially dedicated to the memory of those whose graves are now unseen, or the record of whose names may have become obliterated.”

The remaining portion, and the other two tablets, record names of eminence, alphabetically arranged, including those of Sir John Soane, John Flaxman, John Walker, author of the “Pronouncing Dictionaiy,” Peter Pasqualino, Thomas Mazzinghi, Father O’Lcary, several members of the Norfolk family, Sidkj-Effendi,
Turkish Ambassador to this country, Count D’Herlilly, Charles Louis Victor De Broglie, and Archbishop Dillon. The terraces, which are constructed to form flower-beds, are mainly of red Mansfield stone, worked at the quarries. The panels of the two upper terrace tiers contain flowers — with butterflies as the emblem of immortality — in mosaics ; the top one has panels in relief, representing the four seasons, by Messrs. Wills, of Euston-road. The bottom tier panels are also in mosaics. The whole of the mosaics have been executed by Messrs. Simpson and Sons, of St. Martin’s-lane. The whole is in- closed by kerb and iron railing and gates ; the latter by the St. Pancras Iron Works Company. The contract has been carried out by Messrs. H. Daniel .and Co., of Highgate, under the direction of Mr. George Highton, of 79, Elm Park, Brixton, architect, and has cost upwards of £2,000.”